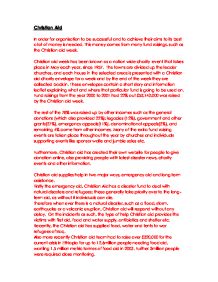 Christian Aid In order for organisation to be successful and to achieve their aims to its best a lot of money is needed. This money comes from many fund raisings, such as the Christian aid week. Christian aid week has been known as a nation wide charity event that takes place in May each year, since 1957. The towns are divided up the leader churches, and each house in the selected areas is presented with a Christian aid charity envelope for a week and by the end of the week they are collected back in. These envelopes contain a short story and information leaflet explaining what and where that particular fund is going to be used on. Fund raisings from the year 2000 to 2001 had 22% out �53,143,000 was raised by the Christian aid week. The rest of the 78% was raised up by other incomes such as the general donations (which also provided 22%); legacies (12%), government and other grants(27%), emergency appeals(11%), denominational appeals(2%), and remaining 4% come from other incomes. Many of the extra fund raising events are taken place throughout the year by churches and individuals supporting events like sponsor walks and jumble sales etc. Furthermore, Christian aid has created their own website for people to give donation online, also providing people with latest disaster news, charity events and other information. Christian aid supplies help in two major ways, emergency aid and long term assistance. Firstly the emergency aid, Christian Aid has a disaster fund to deal with natural disasters and refugees; these generally take priority over to the long-term aid, as without it individuals can die. ...read more.

So money should be given to the Christian Aid to help others. It is important to the people who run the Aid because they are helping to develop the world and help people, which is following their belief and doing God's work. It is important to the people who benefit from the Aid because they know that there are people who care and with the help of Christian Aid can gain help to help themselves. It also gives these people dignity and self respect. Jesus said : ' I was hungry and you fed me, thirsty and you gave me a drink; I was a stranger and you received me in your homes, naked and you clothed me; sick and you took care of me...When ever you did this for one of my family, you did it for me.' Out of every pound Christian Aid receive, 75p is spent on tackling poverty on behalf of the poorest people in the world, 11p is spent on campaigning and education, to change the structures of inequality that keep people poor; 12p is spent on fund-raising; 2p is spent on administration. Analyse and explain the work of one religious agency working for the world of development. In today's modern society there is so much suffering on the world that is unknown to a majority of people. Christian aid helps to relieve people of this suffering all round the world. There main aim is to help people to learn how to support themselves and live on there own two feet. In the poorest parts of the world only 9% of people have toilet facilities. ...read more.

As stated above, even if Christian Aid only help a little bit with certain countries' debt then as shown above, a significant increase in health and general economical benefits will arise. Christian Aid seems to be doing the right thing in means of world development. Maimonides' eight-step ladder showing the best form of charity is to give a person/country exactly what it needs to carry on or to be self-dependant, and as stated by Christian Aid themselves they try to give people their own solutions to the problems. That is why debt cancellation has developed, because as well as the programme making people aware of their own countries debt, the cancellation helps education and therefore making the country self-sufficient as its ministry will benefit for the qualified people. I believe that Christian Aid is one of the few charities that in my eyes do enough for the third world countries. St. Paul stated that 'Christian churches should be generous in helping others, even if they themselves are poor.' This I am sure is one of the many reason Christian Aid operates, because they are serving God by what they re doing. In addition, John 3. 17:18 describes that you must 'put your faith into action. The rich must not ignore the poor.' This should thereby encourage many people of the world to try to be like Christian Aid in the way that they help the world to be a better place. In this instance, by serving God you are getting rid of poverty and the derogatory affiliations that the term 'Third -World' carries with it. ...read more.