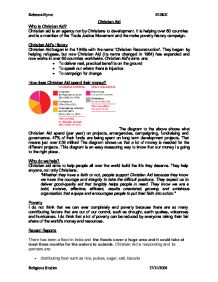 Christian Aid and the EU

They expect us to deliver good-quality aid that tangibly helps people in need. They know we are a bold, incisive, effective, efficient, results orientated, growing and ambitious organisation that equips and encourages people to put their faith into action." Poverty I do not think that we can ever completely end poverty because there are so many contributing factors that are out of our control, such as drought, earth quakes, volcanoes and hurricanes. I do think that a lot of poverty can be reduced by everyone taking their fair share of the world's money and resources. Recent Reports There has been a flood in India and the floods cover a huge area and it could take at least three months for the waters to subside. ...read more.

* Child Care Haiti is supplying food parcels, water purifiers, rehydration salts and medicines. It is also running mobile health clinics in the northwest of the country, where there is a growing threat of water-borne disease such as malaria, diarrhea and typhus. * Veterimed is supplying food baskets, hygiene kits and blankets in and around Port-au-Prince. * Garr is supplying food parcels and water purifiers in central Haiti. Campaign One of their campaigns is 'the trade justice action' which aims to help LEDCs get a fairer deal when trading with people in Europe. 'The European Union is ploughing ahead with unfair trade deals that threaten to derail development for millions of people. We need to act against them before it's too late.' ?? ?? ?? ?? Rebecca Byrne E10KH Religious Studies 17/11/2008 ...read more.