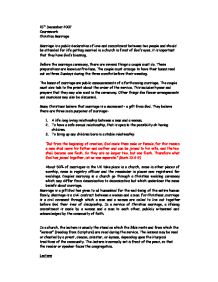 15th December 2007 Coursework Christian Marriage Marriage is a public declaration of love and commitment between two people and should be attended for life getting married in a church in front of God's eyes, it is important that they have God's blessing. Before the marriage ceremony, there are several things a couple must do. These preparations are known as Pre-Cana. The couple must arrange to have their banns read out on three Sundays during the three months before their weeding. The banns of marriage are public announcements of a forthcoming marriage. The couple must also talk to the priest about the order of the service. This includes hymns and prayers that they may also want in the ceremony. Other things like flower arrangements and musicians may also be discussed. Many Christians believe that marriage is a sacrament - a gift from God. They believe there are three main purposes of marriage:- 1. A life long loving relationship between a man and a woman. 2. To have a safe sexual relationship, that is open to the possibility oh having children. 3. To bring up any children born in a stable relationship "But from the beginning of creation, God made them male or female, for this reason a man shall leave his father and mother and can be joined to his wife, and the two shall become one flesh. ...read more.

Since the Gospel lesson is often read from the pulpit, the pulpit side of the church is sometimes called the gospel side. Altar As you walk into the Catholic church the feature which stands out most from the rest is the altar. This tells you that it is the most important feature in the church. The altar, in Judaism, (the religion that Christianity developed from) was the place where sacrifices were offered to God. Sacrifices were a symbol of a persons dedication to God. The person not only offered gifts (animals etc.)to say sorry for sins, but also him/herself. The believer committed their life to following God. The Old Testament tells us that sins can only be forgiven if blood is shed. Something had to be killed on the altar. Christians no longer offer animal sacrifices on the altar because they believe that when Jesus died on the cross he offered the ultimate sacrifice, his life. He gave up his life to save the world from it's sin, this belief is called the Atonement. The altar is still the place where blood is present however. It is present in the wine and bread of the Mass, for a Roman Catholic the bread and wine, when blessed, mysteriously change into the flesh and blood of Christ. ...read more.

Vows is actually what marries you. The minister says to the groom: ' N, will you take N to be your wife? Will you love her, comfort her, honour and protect her, and, forsaking all others, be faithful to her as long as you both shall live?' He then says to the bride: ' N, will you take N to be your husband? Will you love him, comfort him, honour and protect him, and, forsaking all others, be faithful to him as long as you both shall live?' After they have both replied they then face each other. The bride and groom says: 'I, N, take you, N, to be my wife, to have and to hold from this day forward; for better, for worse, for richer, for poorer, in sickness and in health, to ove and to cherish, til death us do part, according to God's holy law; and this is my solemn vow.' They then change over and one of them says exactly the same thing. The Rings After the bride and groom has said their vows the rings are then presented. The rings are a token of love between the couple and is worn as a reminder by the bride and groom. It is a symbol of eternity (that the relationship is going on forever of unending love). ...read more.