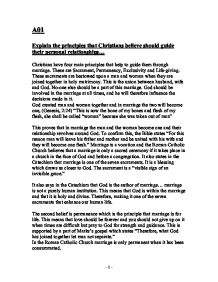 A01 Explain the principles that Christians believe should guide their personal relationships... Christians have four main principles that help to guide them through marriage. These are Sacrament, Permanency, Exclusivity and Life-giving. These sacraments are bestowed upon a man and woman when they are joined together in holy matrimony. This is the union between husband, wife and God. No-one else should be a part of this marriage. God should be involved in the marriage at all times, and he will therefore influence the decisions made in it. God created man and woman together and in marriage the two will become one, (Genesis, 2:24) "This is now the bone of my bones and flesh of my flesh, she shall be called "woman" because she was taken out of man" This proves that in marriage the man and the woman become one and their relationship revolves around God. To confirm this, the Bible states "For this reason man will leave his father and mother and be united with his wife and they will become one flesh." Marriage is a vocation and the Roman Catholic Church believes that a marriage is only a sacred ceremony if it takes place in a church in the face of God and before a congregation. It also states in the Catechism that marriage is one of the seven sacraments. It is a blessing which draws us closer to God. The sacrament is a "visible sign of an invisible grace." It also says in the Catechism that God is the author of marriage... marriage is not a purely human institution. This means that God is within the marriage and that it is holy and divine. Therefore, making it one of the seven sacraments that enhance our human life. The second belief is permanence which is the principle that marriage is for life. This means that love should be forever and you should not give up on it when times are difficult but pray to God for strength and guidance. ...read more.

For a devout Catholic couple Natural Family Planning means there is nothing artificial between sex and giving life and shows that you are still open to choose life. Whilst many married couples may try and prevent conception, many others have fertility problems where they are unable to conceive naturally. However, as technology is advancing there are now more options they can choose from to try and make their dreams of a family come true. There are three main types of artificial conception, In Vitro Fertilisation (IVF) Artificial Insemination, by Husband (AIH) and Artificial Insemination by Donor (AID) Whilst the Bible does not say anything about fertility treatment some Christians, especially Roman Catholics believe that it is wrong because it interferes with nature and God's plan for couples. They might say if a couple cannot conceive naturally, it is because God does not want them to be parents. For a couple who desperately want a family this can appear to be a very harsh judgement. Other Christians believe that fertility treatment is often a good thing because it helps bring new life into the world and gives happiness to those who long to be parents. Even if Christians believe that on a whole fertility treatments are a good thing they often express doubts about some aspects of it. IVF is an example of "test tube babies" where eggs are fertilised outside of the womb. If some successfully become embryo's they are then inserted into the womb to create a foetus. The Catholic Church does not advocate IVF as it could be a donor's egg or sperm and that goes against the principle that marriage is "exclusive." Also the destruction of "spare" embryos is seen as the destruction of human life; The Church of England feel that this type of fertility treatment is acceptable as long as the embryos are destroyed after 14 days. AIH and AID are both accepted by the Church of England but not by the Catholic Church. ...read more.

This also goes back to free will and the right we have to make our own choices if we have good reason and have thought about them carefully. The RC Church even goes so far as to say that divorce is adultery which is another thing that I find extremely outdated. It demonstrates a lack of understanding for people's feelings and a consideration for different situations which might arise. Some women are in relationships where they are beaten, sexually abused and even have their lives in danger. It is easy to ask people to forgive and forget. You can try to resolve issues but the fact is that in some cases this just isn't a practical option, especially when children are involved. Children can also be the victims of abuse and be caught up in the emotional turmoil of a broken marriage. I think that it is far better for children to grow up with one parent who loves them than with two that create a dysfunctional family. This can cause life-long emotional problems for the child throughout their development. Although the Catholic Church does not permit divorce they do allow an annulment in certain cases. These circumstances are... mental illness, immaturity to understand the marriage and non consummation of marriage. In the past an annulment was very expensive and therefore only available to the rich. Even though an annulment is now easier to gain financially, the cost is still too high for some couples because of the high skill of the service. This is because the investigators have to be both priests and lawyers and theirs is a very complicated job! Divorce has now become so easy that we are beginning to see the effects on society in general. Children are coming from broken homes without guidance from a mother and father, traditional families values are not being not being taught, things like good manners, respect and consideration for others are lacking and as a result crime and antisocial behaviour has increased. ?? ?? ?? ?? - 1 - ...read more.