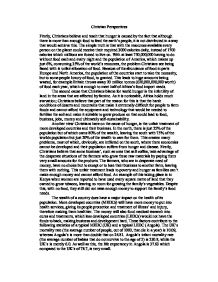 Christian Perspectives Firstly, Christians believe and teach that hunger is caused by the fact that although there is more than enough food to feed the earth's people, it is not distributed in a way that would achieve this. The simple truth is that with the resources available every person on the planet could receive their required 3000 calories daily, instead of 1700 calories which millions are forced to live on. With at least 750,000,000 having to do without food each and every night and the population of America, which makes up just 6%, consuming 35% of the world's resources, the problem Christians see being faced with is unfair allocation of food. Because of the abundance of food in parts Europe and North America, the population of the countries start to take the necessity, but to some people luxury of food, to granted. This leads to huge amounts being wasted, for example Britain throws away 20 million tonnes (�20,000,000,000 worth) of food each year, which is enough to meet half of Africa's food import needs. The second cause that Christians blame for world hunger is the infertility of land in the areas that are affected by famine. As it is noticeable, Africa holds much starvation; Christians believe that part of the reason for this is that the harsh conditions of deserts and mountains that make it extremely difficult for people to farm foods and cannot afford the equipment and technology that would be needed to fertilise the soil and make it suitable to grow produce on that could lead to food, business, jobs, money and ultimately self-sustainability. Another view Christians have on the cause of hunger, is the unfair treatment of more developed countries and their business. In the north, there is just 25% of the population but of which owns 80% of the wealth, leaving the south with 75% of the worlds population but just 20% of the wealth to care for them. ...read more.

The fact that they are praying for people they don't even know, makes this a very selfless and meaningful act, and if nothing else, at least shows that they are sympathising for the people that suffer from hunger and disease. Christians also have a fasting period which is known as Lent. The period is similar to that of Ramadan which is practiced by those of Islamic faith and takes place between Ash Wednesday and Easter Sunday, making it a 46 period, consisting of 40 days of fasting. Traditionally, Lent took place to empathize with Jesus during his 40 days of fasting and resisting temptations, but today, more commonly, the act is not only done to increase self-discipline, but also to empathize with those who are not as fortunate as themselves. In doing this they are putting themselves in the shoes of sufferers of hunger and disease all over the world. Some Christians will also respond to world hunger by taking action, in events such as marches or protests. An example of this is during the G8 summit, when it is believed that thousands of Christians took to the streets to expresses their feelings on the unfair treatment of third world counties and suggest ways of dealing with it. In doing this they are trying to gain the attention of the people, such as the world leaders who are part of the G8 summit, with the power to change the treatment of the third world countries and help those who are suffering at the hand of hunger and disease. Another, more hands on method of helping those who are less fortunate, is travelling to the LEDC countries and doing voluntary work. Although this method is more expensive, it is helping people directly so unlike giving money to charity, they get a real sense to how they are helping and it is much more rewarding to know tat you have improved someone's life first hand. ...read more.

However, practically, Christians are taught to seek forgiveness for their own sins by praying, showing that they are their own responsibility and it is not the fault of other Christians. The wealth of ones self does have a direct impact on the responsibility they have as well. For example, it would be stupid for a Christian who is struggling to provide for his family to donate large amount of money to charity because this would cause more financial trouble for them which could lead to them being the subject of a charitable organisation to get themselves back on their feet. This is represented in the saying, 'Charity starts at home', and shows how the Christian them-self comes first; so before they get any responsibility for anyone else they must make sure that they are provided for. An example of how Christians are responsible for others because of the Christian belief that the community of the world is 'one body', and therefore everyone is united because without one part of the body the rest will find it harder to function, consequently we all need each other to survive. Also, in the eyes of the Vatican, 'if you do not feed a dying man, you are killing him', which means that if you don't take responsibility you are as good as murdering the people that need help and the fact that 'thou shall not kill' is in one of the 10 commandments (the 10 ultimate rule for Christians that must be followed above all else) shows how important it is. In conclusion, although practically, it is very hard for Christians to be responsible for everyone -no matter where they live, that is what it takes to be part a religion, especially one like Christianity, whose principles are based around having a love for everyone. The definition of a Christian is someone 'showing a loving concern for others', therefore to be Christian you have the responsibility of other on your shoulders, but however strenuous that task sounds, a Christian who follows that rule is supported and loved by the responsibility of millions of others. ...read more.