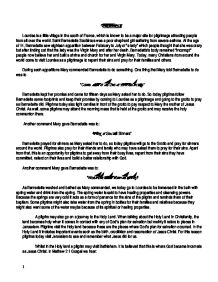 Pilgrimage Lourdes is a little village in the south of France, which is known to be a major site for pilgrimage attracting people from all over the world. Saint Bernadette Soubirous was a poor shepherd girl suffering from severe asthma. At the age of 14, Bernadette saw eighteen apparition between February to July of "a lady" which people thought that she was crazy but after finding out that the lady was the Virgin Mary and after her death, Bernadette's body remained "incorrupt" people now believe her and built a shrine and church for her and Virgin Mary. Today, many Christians from around the world come to visit Lourdes as a pilgrimage to repent their sins and pray for their families and others. During each apparitions Mary commanded Bernadette to do something. One thing that Mary told Bernadette to do was to: "Come back to the Grotto for fifteen days" Bernadette kept her promise and came for fifteen days as Mary asked her to do. ...read more.

A pilgrim may also go on a journey to the Holy Land. When talking about the Holy Land in Christianity, the land becomes holy when it comes in contact with any of God's plan for salvation but mainly it refers to places in Jerusalem. Pilgrims visit the Holy land because these are the places where God's plan for salvation occurred. In the Holy Land it includes important events such as the birth, crucifixion and resurrection of Jesus Christ. For this reason pilgrims today visit Jerusalem to see and remember what Jesus did for us. Whilst in the Holy land a pilgrim may visit Bethlehem. It is believed that this is where God became incarnate as Jesus Christ. In Mathew 2:1 Gospel we hear: "After Jesus was born in Bethlehem in Judea, during the time of King Herod" A pilgrim may visit the Church of Nativity where they will have to enter through the "Door of humility" for the reason that it is said that the door is very low and you will have to bend down to enter. ...read more.

The Via Dolorosa is believed to be the route that Jesus went through, so pilgrims may walk this route so that they can feel just a fraction of what Jesus went through because it will be quiet humiliating as people living there may be watching and saying things about them. Also, the Via Dolorosa is marked by nine of the fourteen Stations of the Cross therefore pilgrims can pray in front of them from one to the other. The last five stations are inside the Basilica of the Holy Sepulchre. Pilgrims visit this Church because this is believed to be where Jesus was crucified and to see how he suffered for us on the cross is a means of aiding pilgrims in prayer and to reflect on their lives. Its also a chance for pilgrims to see the Church for the reason that the church is very beautiful and the many mosaics the church has is good chance for pilgrims to see. On Good Friday pilgrims make their way up the Via Dolorosa behind someone carrying a large wooden cross. A special service is also held every 3pm on Friday. ?? ?? ?? ?? 1 ...read more.