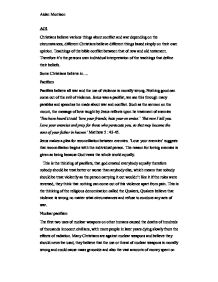 Christian views on a just war.

AO1 Christians believe various things about conflict and war depending on the circumstances, different Christians believe different things based simply on their own opinion. Teachings of the bible conflict between that of new and old testament. Therefore it's the persons own individual interpretation of the teachings that define their beliefs. Some Christians believe in.... Pacifism Pacifists believe all war and the use of violence is morally wrong. Nothing good can come out of the evil of violence. Jesus was a pacifist, we see this through many parables and speeches he made about war and conflict. Such as the sermon on the mount, the message of love taught by Jesus reflects upon he treatment of enemies 'You have heard it said 'love your friends, hate your enemies.' 'But now I tell you. Love your enemies and pray for those who persecute you, so that may become the sons of your father in heaven' Matthew 5 : 43-45. Jesus makes a plea for reconciliation between enemies. 'Love your enemies' suggests that reconciliation begins with the individual person. The reason for loving enemies is given as being because God treats the whole world equally. This is the thinking of pacifists, that god created everybody equally therefore nobody should be treat better or worse than anybody else, which means that nobody should be treat violently as the person carrying it out wouldn't like it if the roles were reversed, they think that nothing can come out of this violence apart from pain. This is the thinking of the religious denomination called the Quakers, Quakers believe that violence is wrong no matter what circumstances and refuse to condone any acts of war. Nuclear pacifism The first two uses of nuclear weapons on other humans caused the deaths of hundreds of thousands innocent civilians, with more people in later years dying slowly from the effects of radiation. Many Christians are against nuclear weapons and believe they should never be used, they believe that the use or threat of nuclear ...read more.

So they are part of a war, but instead of killing, they may be saving lives, so they are not involved in the violence, which they strongly disagree in. The fighter members of the church use stories from the bible about what Jesus did to try and prove that the bible supports their views. One of the main stories from the New Testament that they use is the story about Jesus in the temple, as he did not love his enemies, but he did this in order to protect the weak and vulnerable and to uphold good. Fighters also follow Jesus' teaching of how we should follow what we believe in and being a good citizen and so they believe that it is correct to fight so that they can fulfil these teachings they believe that it is all right to use violence as a form of self-defence; they will on attack if they are threatened or attacked. Roman Catholics may go to war and then confess to free him of his sins, but all these different views on fighting in war or using violence, are all opinionated, whether the Christian thinks that it is right to use there violence. Single members and groups within the Church believe their own views, but what can the Church do to incorporate everyone's views and bring everyone together? This can prove to be a difficult task as what one group such as the pacifists believe, is not the same as what the fighters believe. The Church does not want to be seen as promoting violence as this is not what anyone wants, but it also doesn't want to stop Christians from being good citizens and not supporting their countries. Many Churches use all different points of views and support each of their arguments with references from the Bible to show that Jesus supported all different kinds of viewpoints about war and that although single members of the Church are entitled to their own opinions, the Church as ...read more.

If people keep bringing up what has been done in the past, and dwelling on it, then this suggests that forgiveness has not truly been granted, therefore, reconciliation does not occur. Also, by refusing to forget what has been done, a person becomes consumed with regret, bitterness and anger, all of which are all destructive characteristics resulting in their lives becoming focused on mourning and revenge, and the motivation and ability to move on is lost. Constantly reminding someone of past feelings is un-Christian behaviour. In conclusion, I believe that it is possible for a person to forgive, but I agree that it is not always possible to forget what they have done. Are we supposed to forget every time a person sins? Maybe we can forget the odd venial sin, but what about mortal sins, like somebody killing someone close to you? It is just not possible to forgive and forget about somebody who commits mass murder such as Myra Hindley, and we know that a victims mother, Anne West, can never forgive what Myra Hindley did to her daughter, and cannot bring herself to say the words, "forgive us our sins, as we forgive those who trespass against us," in the Lord's Prayer. In my opinion the world would be a much better place if everyone forgave and forget as there wouldn't be such thing as conflicts if everyone followed the rule, there would just be peace. However I also think that it is impossible for us as humans to do this as we are simply not good enough as a race to be able to carry this out, there will always be 'bad' people that other people see as monsters but to themselves they are merely doing what they think they should do. As Christians we all do our utmost to forgive and forget - none of us are without sin; let those who have committed no sin cast the first stone. ...read more.