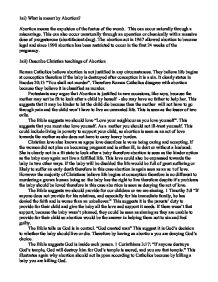 1ai) What is meant by Abortion? Abortion means the expulsion of the foetus of the womb. This can occur naturally through a miscarriage. This can also occur unnaturally through an operation or chemically with a massive dose of progesterone (abortifacient drug). The abortion act in 1967 allowed abortion to become legal and since 1990 abortion has been restricted to occur in the first 24 weeks of the pregnancy. 1aii) Describe Christian teachings of Abortion Roman Catholics believe abortion is not justified in any circumstances. They believe life begins at conception therefore if the baby is destroyed after conception it is a sin. It clearly states in Exodus 20:13 "You shall not murder". Therefore Roman Catholics disagree with abortion because they believe it is classified as murder. Protestants may argue that Abortion is justified in rare occasions, like rape, because the mother may not be fit to look after a child by herself - she may have no father to help her. This suggests that it may be kinder to let the child die because then the mother will not have to go through pain and the child won't have to live an unwanted life. ...read more.

Christians especially Catholics have decided to act upon this and get Married before having sex to avoid the need of Abortion because therefore the baby has more reason to live as there is a secure family for there to be no big issues. God also is in favour of a secure family. 3 Evangelical Christians in the UK and America have promoted organizations such as 'The Silver Ring Thing' which is a schools roadshow that promotes not having sex before marriage, by making a pledge and wearing a ring so you remind yourself that you have made a promise to yourself and your future lifelong partner, that having sex and hopefully even one's virginity, is going to be a special gift to that one person. The gift of you body (the temple of the Holy Spirit) is then given to each other on your wedding night. By doing this you could be preventing the need for an abortion as inside a secure relationship like marriage the purpose of marrying someone is to start a family. 3 As Catholics are so against abortion they decide to support organisations such as SPUC (Society for the Protection of Unborn Children) ...read more.

Having a disabled child will be a strain on a marriage and on finances and social reasons because they will need extra care, money and support by parents and possibly guardians (teachers) and distant family. I also believe it can be a form of correcting nature. The body naturally miscarries a child particularly when the child is unhealthy. Sometimes the body carries on supporting the child despite its condition whether this is right in severe cases of disability to the child can be sometimes kinder to let the child die at a very young age (up to 22 weeks). However any other cases including rape the baby should still survive because many women are infertile and unable to have children. If you keep the child you are allowing them to have that chance of having children. Despite the awful history the child is healthy and I would prefer to live a healthy life than to have died due to the fact I was the result of a sexual offence. Overall I believe the abortion issues should evolve around who's life is more important; the life of the mother or the life of the unborn child, and not because who want a girl or a boy or whether it was an accident and you're in a stable relationship. ...read more.