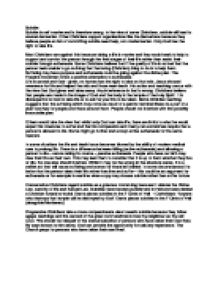 Suicide Suicide is self murder and is therefore wrong. In the view of some Christians, suicide will lead to eternal damnation. Other Christians support organisations like the Samaritans because they believe people at risk of committing suicide need help, not condemnation. Only God has the right to take life. Most Christians are against this because taking a life is murder and they would seek to help to support and comfort the person through the final stages of their life rather than assist their suicide through euthanasia. Some Christians believe that if the quality of life is so bad that the person feels unable to go on living that the loving (Christian) thing to do is to help them. Suffering may have purpose and euthanasia could be going against the divine plan. ...read more.

It is disrespectful to God to take life or to ask for your life to be taken. Some Christian teaching suggests that the suffering which may come as result of a painful terminal illness is a part of a plan God has for people and those around them. People should not interfere with this possibly inscrutable plan. Others would take the view that whilst only God can take life, there are limits to what he would expect his creatures to suffer and that his compassion and mercy can sometimes require that a person is allowed to die. Some might go further and accept active euthanasia for the same reasons. In some situations the life and death issue becomes blurred by the ability of modern medical care to prolong life. ...read more.