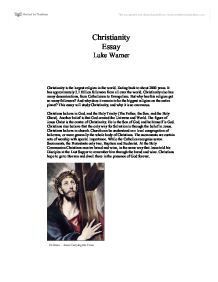 Christianity Essay Luke Warner Christianity is the largest religion in the world. Dating back to about 2000 years. It has approximately 2.1 Billion followers from all over the world. Christianity also has many denominations, from Catholicism to Evangelism. But why has this religion got so many followers? And why does it remain to be the biggest religion on the entire planet? This essay will study Christianity, and why it is so enormous. Christians believe in God, and the Holy Trinity (The Father, the Son, and the Holy Ghost). Another belief is that God created the Universe and World. The figure of Jesus Christ is the centre of Christianity. He is the Son of God, and he himself is God. Christians also believe that the only way for Salvation is through the belief in Jesus. Christians believe in church. Church can be understood as a local congregation of believers, or more generally the whole body of Christians. The sacraments are curtain acts of worship with special importance. While the Catholics recognise seven Sacraments, the Protestants only two, Baptism and Eucharist. At the Holy Communion Christians receive bread and wine, in the same way that Jesus told his Disciples at the Last Supper to remember him through the bread and wine. Christians hope to go to Heaven and dwell there in the presence of God forever. ...read more.

They got Peter and John to come and look. They both saw the angel too, but they searched the tomb, only to find that Jesus had gone. They had all gone off to spread the good news that Jesus had risen from the dead, but Mary Magdalene (one of Jesus' close followers) stayed at the tomb, crying. Then someone she thought was a Gardener came to Mary, and she asked "If you have Jesus then please let us see him, and give him back to us." But then the Gardener said, "Mary, I am Jesus." At that point she then recognised him. It was Jesus! She then went back to tell everyone else that she had seen and spoken to Jesus. After this Jesus met with all of the Disciples (apart from Judas who it is believed to have committed suicide out of guilt). Jesus was with the disciples for about six weeks and He was then taken up into heaven. Before he left them He told, "I have to go, but you will all carry on spreading my teachings to people of all nationalities". Until then they had all been spreading Christianity throughout only the Jewish community. To spread Christianity, the Holy Ghost enabled the disciples to speak in any language they needed. So then the Disciples went around the Mediterranean and Middle East and spread the word of Jesus, but they were not always popular or welcome. ...read more.

During the medieval times there were many Critics (for example John Wycliffe and Jan Hus) of the Catholic Church because of its corruption, indulgence and malpractice. These ideas culminated in the work of Martin Luther (1483-1546), the initiator of the Protestant Reformation. This reform movement started in 1517, when Martin Luther nailed "Ninety-Five Theses" to the door of All Saints Church in Wittenberg, Saxony and formally finished in 1648 with the Peace of Westphalia. Protestantism became a well-established branch of Christianity in Western Europe. There are several reformist denominations in Protestantism, for example Anglicans, Lutherans, Baptists, Presbyterians and Methodists. They all separated from the Catholic Church in the 16th Century. The Protestants rejected Papal authority. They placed emphasis on the Priority of the Bible. In the Catholic Church only the Priest is allowed to drink the wine and bread in Holy Communion, while in Protestantism the laity also receives both bread and wine. Protestants reject the principle of celibacy, so the Protestant Priest can marry. Protestants have generally suspicious attitude towards Mary and the other Saints. Because they see their adoration as a potential source of idolatry. From a humble beginning, Christianity reached mankind across the globe, and eventually became the largest religion in the world. The fact that its numbers are still growing, it only proves that Jesus' teachings of love, forgiveness, and judging people without prejudice are at least as important as 2000 years ago. ...read more.