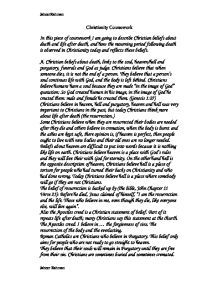 Christianity Coursework In this piece of coursework I am going to describe Christian beliefs about death and life after death, and how the mourning period following death is observed in Christianity today and reflects these beliefs. A. Christian beliefs about death, links to the soul, heaven/hell and purgatory, funerals and God as judge. Christians believe that when someone dies, it is not the end of a person. They believe that a person's soul continues life with God, and the body is left behind. Christians believe humans have a soul because they are made "in the image of God" quotation: So God created human in his image, in the image of God he created them: male and female he created them. ...read more.

Beliefs about heaven are difficult to put into words because it is nothing like life on earth. Christians believe heaven is a place with God's rules and they will live their with God for eternity. On the other hand hell is the opposite description of heaven, Christians believe hell is a place of torture for people who had turned their backs on Christianity and who had done wrong. Today Christians believe hell is a place where somebody will go if they are not Christians. The belief of resurrection is backed up by (the bible, John Chapter 11 Verse 25): Before he died, Jesus claimed of himself, "I am the resurrection and the life. Those who believe in me, even though they die, like everyone else, will live again". ...read more.