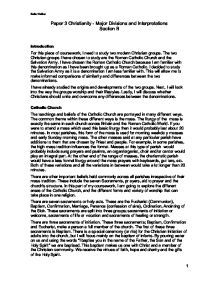 Paper 3 Christianity - Major Divisions and Interpretations Section B Introduction For this piece of coursework, I need to study two modern Christian groups. The two Christian groups I have chosen to study are the Roman Catholic Church and the Salvation Army. I have chosen the Roman Catholic Church because I am familiar with this denomination as I have been brought up as a Roman Catholic. I decided to study the Salvation Army as it is a denomination I am less familiar with. This will allow me to make informed comparisons of similarity and differences between the two denominations. I have already studied the origins and developments of the two groups. Next, I will look into the way the groups worship and their lifestyles. Lastly, I will discuss whether Christians should unite and overcome any differences between the denominations. Catholic Church The teachings and beliefs of the Catholic Church are portrayed in many different ways. The common theme within these different ways is the mass. The liturgy of the mass is exactly the same in each church across Britain and the Roman Catholic World. If you were to attend a mass which used this basic liturgy then it would probably last about 20 minutes. In most parishes, this form of the mass is used for morning weekday masses and early Sunday morning mass. The other masses said at any particular parish have additions to them that are chosen by Priest and people. For example, in some parishes, the high mass tradition influences the format. Masses at this type of parish would probably include sung prayers and psalms, an organ/organist, choir and/or cantor would play an integral part. At the other end of the range of masses, the charismatic parish would have a less formal liturgy around the mass prayers with keyboards, guitars, etc. Both of these variations and all the variations in between would take a lot longer than 20 minutes. ...read more.

We believe in one Lord, Jesus Christ, the only Son of God, eternally begotten of the Father, God from God, Light from Light, true God from true God, begotten, not made, one in Being with the Father. Through him all things were made. For us men and for our salvation he came down from heaven: by the power of the Holy Spirit he was born of the Virgin Mary, and became man. For our sake he was crucified under Pontius Pilate; he suffered died and was buried. On the third day he rose again in fulfilment of the Scriptures; he ascended into heaven and is seated at the right hand of the Father. He will come again in glory to judge the living and the dead, and his kingdom will have no end. We believe in the Holy Spirit, the Lord, the giver of life, who proceeds from the Father and the Son. With the Father and the Son he is worshipped and glorified. He has spoken through the Prophets. We believe in one holy catholic and apostolic Church. We acknowledge one baptism for the forgiveness of sins. We look for the resurrection of the dead, and the life of the world to come. Amen." After the Creed has been spoken, bidding prayers are read aloud. Everyone says the Hail Mary at this time, after the bidding prayers. After this, comes the most important part of the mass; the Liturgy of the Eucharist, and the Communion Rite which is where the bread and wine are taken to the altar and the priest transforms them into the body and blood of Christ. This is called Transubstantiation, which Catholics believe in. (see page 2) "While they were eating, Jesus took a piece of bread, gave a prayer of thanks, broke it, and gave it to his disciples and said 'take it, this is my body'. Then he took a cup, gave thanks to God and handed it to them; and they all drank from it. ...read more.

The money which would have been used to buy food on these days is then donated to CAFOD and used in its projects around the world. Some Christians may choose to go on Pilgrimage to feel closer to God. Most pilgrims go on pilgrimage to show their faith in God, to pray and get close to him. Visiting these places helps them to stay close to God, partly because they are devoting some of their time to God. Although Christians can pray to God in any place and at any time, some feel that being in a place of pilgrimage can help them in their prayer. They go on pilgrimages to pay homage to God and to pray, possibly for others who are ill or for friends or relatives who do not believe in God. There are many different places to go on Catholic Pilgrimage. Some Catholics may choose to stay in the UK, and go to somewhere like Walsingham (often described as 'England's Nazareth'), Canterbury, Knock (Ireland) or even an ecumenical centre such as Iona (Scotland). Many visit the places where Jesus lived, especially during the Christian festivals (Bethlehem at Christmas, Jerusalem at Easter) and the 'Holy Lands', such as Israel/Palestine. Other places that are popular are Rome, Fatima(Spain), etc. Some sites of pilgrimage, such as Lourdes in France, have a history for healing physical disorders. Some people visit these places in the hope that they will be healed, or that the experience will help them come to terms with their illness and accept it. In a similar way, Christians who feel far from God might go on pilgrimages for spiritual healing. Conclusion Within the Roman Catholic Church, there are many different ways of Worship. In some cases, the forms of worship are the same as they were several hundred years ago. In other cases, the form of worship has changed completely. However, all these are based around the same faith. This proves that although there are many different ways to worship, all Roman Catholics have the same beliefs in God. Katie Walker 1 ...read more.