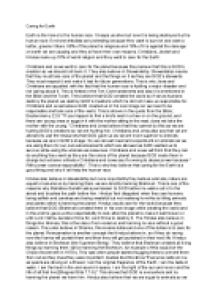 ﻿Caring for Earth Earth is the home to the human race. It keeps us alive but now it is being destroyed by the human race. Environmentalists are protesting because they want to survive and want a better, greener future. 88% of the planet is religious and 79% of it is against the damage on earth we are causing and they all have their own reasons. Christians, Jewish and Hindus make up 70% of world religion and they want to care for the Earth. Christians and Jews want to care for the planet because they believe that this is GOD?s creation so we should not harm it. They also believe in Stewardship. Stewardship means that they must take care of the planet and the things on it as they are GOD?s stewards. They must respect it and make it last for future generations. This is why Jews and Christians are appalled with the fact that the human race is fuelling a major disaster and not caring about it. This is hinted in the Ten Commandments and also it is mentioned in the Bible and the Torah. They believe that GOD created the world so if we as humans destroy the planet we destroy GOD?s creations which he did not make us responsible for. Christians and Jews believe GOD created us in his own image so we need to be responsible and take care of the world. This is shown in the quote from the Bible; Deuteronomy 22:6 ?"If you happen to find a bird's nest in a tree or on the ground, and there are young ones or eggs in it with the mother sitting in the nest, does not take the mother with the young.? Christians and Jews believe that they cannot do this as we are hurting GOD?s creations so we are hurting him. Christians and Jews also say that we are allowed to use the resources that GOD gave us as we are more superior to animals because we are in GOD?s image. ...read more.

Greenhouse gases in the atmosphere, mainly carbon dioxide, methane, nitrous oxide and fluorocarbons, are heating up the earth To stop this we have to try and not waste too much electricity so less fuel is burnt. We have to cut down on car usage as they release carbon dioxide and we have to recycle as much as possible. Wild habitats all over the world are fast disappearing. As the habitats decrease, so do their communities of animals and plants. Habitat destruction is one of the main reasons why many species face extinction. We should not purchase any animal goods like skin, ivory ,horns etc. Also we must try and reduce our carbon foot print and not pollute habitats. Religions may be followed by different people and have different GODs and prophets but all religions share a simple foundations that we must care for everyone including the planet and the environment. This means that the religions have strong similarities within them to help them get along. There are lots of similarities within Christianity, Judaism and Hinduism. Firstly they are all against the damage that the mankind does to nature and the environment and they all want to do their best to prevent this. Another similarity between their views is that they are all religion driven and their motive is obeying GODs commands and fulfilling his demands. Another thing that makes their views similar is that they all believe that mankind is to blame and they need to do everything to stop this. These religions also believe in the fact that GOD created the planet so by hurting the planet we are hurting him. They also believe in stewardship and they believe that GOD gave them responsibility while putting us at the top of the hierarchy. He made us responsible and this is why we need to take care. All the religions also think that in the afterlife they will be punished if they don?t look after the planet because on Judgement Day GOD will punish you. ...read more.

By helping charities and organisations we can gain support and awareness to help everyone. The holy texts were written thousands of years ago so they have become a bit ?out of date? this has led to difficulties interpreting them in this current world because they don?t fit in. This is one of the reasons people struggle to understand the meanings and put the teachings into action as it is VERY hard but I think we should be able to at least make some sense and put them into context to help protect the environment because something is better than nothing. There are many problems religious people face to interpret the meanings and teachings from Bhagvad Gita in Hinduism, Torah in Judaism and Bible in Christianity. The people struggle to bring the teachings that they have learnt into the current world today because it has changed a lot since 5000+ years. Firstly there has been a big push in technology which did not exist then so this has changed our lives and the Holy Books have nothing on them as they did not exist at the time. Also technology is one of the reasons why so much pollution is being produced because some technologies have become necessities. Another problem we face is the extremeness of the text in the holy books because in the olden days everything was strict and orderly and this meant the rules were strict so in this world they are hard to follow because the community can?t cope. However these teachings can be interpreted in a simpler way so they fit into our life; we could take the very simple meaning of the text and put it to action as this will still help protect the planet. I think that even though we can?t interpret the exact wording and meaning we should be able to understand the brief outline or moral and that is enough to be working on to change the planet and make it a better place for everyone to live in and secure a future. ...read more.