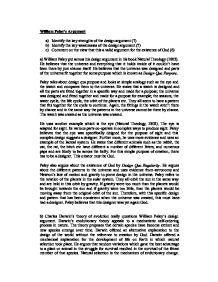 Paley talks about design qua purpose and looks at simple analogy such as the eye and the watch and compares them to the universe. He states that a watch is designed and all the parts are fitted together in a specific way and made for a purpose; the universe was designed and fitted together and made for a purpose for example; the seasons, the water cycle, the life cycle, the orbit of the planets etc. They all seem to have a pattern that fits together for the cycle to continue. Again, the fittings in the watch aren’t there by chance and in the same way the patterns in the universe cannot be there by chance. The watch was created as the universe was created.

He uses another example which is the eye (Natural Theology, 1802). The eye is adapted for sight. Its various parts co-operate in complex ways to produce sight. Paley believes that the eye was specifically deigned for the purpose of sight and this complex design suggests a designer. Further more, he uses more evidence and uses an example of the lacteal system. He states that different animals such as the rabbit, the cat, the rat, the bitch etc have different a number of different litters, and numerous paps and are likely to be across the belly. For this simple purpose of creation, there has to be a designer. This creator must be God.

Paley also argues about the existence of God by Design Qua Regularity. He argues about the different patterns in the universe and uses evidence from astronomy and Newton’s law of motion and gravity to prove design in the universe. Paley refers to the rotation of the planets in the solar system. They all orbit the sun in the same way and are held in this orbit by gravity. If gravity were too much than the planets would be brought towards the sun and if gravity were too little, than the planets would be moving away from the original orbit of the sun. Therefore, with this specific design and pattern that has been consistent when the universe was created, this must have had a designer. Paley believes that this designer was yet again God.

b) Charles Darwin’s theory of evolution really questions William Paley’s design argument. Darwin’s evolutionary theory appeals to a mechanistic self-ordering process in nature. The theory proposes that certain species have become extinct and new species emerge over time. Darwin offered an alternative explanation to the design of the world without the reference to creation by God. Darwin offered a mechanical explanation for the development of life on Earth in which natural selection took place. He argues that random variations which gave the best advantage to a plant or animal in the struggle for survival resulted in the survival of the fittest member of that species. Natural selection is the mechanism of evolutionary change. The hereditary characteristics of a member of any species which are good for survival and reproduction, will lead to more members of the species with those characteristics passing on their genes. These characteristics are passed onto each generation until all members of the species evolve and change. So by natural selection particular variations are favored and effect a gradual transformation in the appearance and behavior of any species.

The way in which Paley describes his views on the design argument is all put into simple and understandable analogy. He expressed his theory in 1802 in a time where technology was limited and he only uses the evidence that is around him at that time. His research is limited as his theories are produced by the environment around him. For example he questions the stone being in the middle of the field and asks how it got there. He then compares this to a watch and assumes that because the watch has a design, a designer and therefore a creator, that the universe has a design, a designer and therefore a creator. However, assumes all this and has no clear evidence that the universe has a certain creator. With technology now days scientists believe that the world was created by the Big Bang but it was bound to happen over time and this didn’t need a creator for this to happen. They also believe in Darwin’s theory of evolution that we have evolved into the beings we are today. Paley’s theory is at a major disadvantage today as technology has questioned it in nearly every way.

David Hume was a also a major opponent of the design argument. He believes that humans don’t have sufficient knowledge and experience of the creation of the world to conclude that there’s only one designer. Human’s have only the experience of the things they design and create. This limited experience isn’t sufficient to come to similar conclusions about the creation and design of the world. Hume also argues that to try and discuss the design of the universe in human terms wasn’t an acceptable analogy because God exceeds human understanding. If we were to use an analogy than it would be more useful to use something that humans have manufactured. The machine is manufactures and is designed by many hands. This analogy could suggest that the universe was made by more than one God. Hume’s Epicurean hypothesis argues that at the time of creation, the universe consisted of tiny particles in random motion. Gradually the natural forces evolved into an ordered system and this constant ordered system developed to form the current stable universe.

c) William Paley’s work shows that he believes that there was a design to the universe and this designer was God. Many religions will agree with his theory such as Islam, Christianity and Judaism. In the religious Holy Scriptures such as the Holy Quran, the Bible and the Torah there are verses which indicate that this universe was created by one God and therefore agree with William Paley’s theory.

In the first section of the Holy Quran, Chapter number one, verse number two it states,

‘All the praises and thanks be to Allah (God), the Lord of the Alameen (mankind, jinns and all that exists.’)

In the Holy Quran there are many verses which state that there is only one God and that he is the creator and Lord of everything that exists. Muslims believe in ‘Thauhid’ which believes that there is only one God who has no partners. All good Muslims will believe in this. Thauhid is a firm belief in Allah and his miraculous creations. Muslims believe that Allah has limited our knowledge and we cannot question the will of Allah. Everything that is and ever will be is because of Allah and Muslims do not believe that we were crated by chance. Therefore Muslims agree with William Paley’s design theory. In the Bible, in the Old Testament it also states that God was the designer and creator of the universe. It states that God made the world in six days. This is yet again more evidence to state that God designed the universe.

However, atheists can argue that the universe could not have been created by God as we haven’t any clear evidence to prove the existence of God. We cannot see God so how can we believe in Him? How can God be all-knowing and love his creation when evil and suffering continues to dwell in certain parts of the world? The fact that technology has developed significantly over the last century enables us to make other theories about the design of the universe other than the creation of the universe by God. The theory of evolution doesn’t mention us being created by God but us evolving for ‘the survival of the fittest’ to more intelligent beings.

I believe that William Paley’s theory of the design of the universe by a super intelligent being is correct as it is supported by the major world leading religions such as Islam, Christianity and Judaism. As a watch is designed with all the cogs and screws in certain places for the watch to function for the purpose of telling the time in a certain pattern, I believe the universe is created in this way. There are many patterns such as the orbit of the planets around the sun. The gravity around the planets isn’t too big or too small. If gravity were too big than the planets would be pulled towards the sun. If gravity were too small then the planets would be pushed away from the sun. The gravity around the planets is perfect. Planets can orbit the sun and life is able to continue on Earth. This is no coincidence as the pattern and intelligence behind this work of art is too great for it to occur by a matter of chance. Therefore I believe that the universe was designed and created by one designer, one creator, one mastermind, one God.