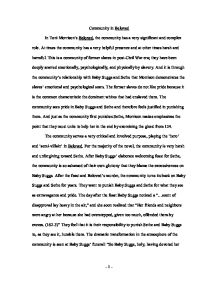 Community in Beloved In Toni Morrison's Beloved, the community has a very significant and complex role. At times the community has a very helpful presence and at other times harsh and harmful. This is a community of former slaves in post-Civil War era; they have been deeply scarred emotionally, psychologically, and physically by slavery. And it is through the community's relationship with Baby Suggs and Sethe that Morrison demonstrates the slaves' emotional and psychological scars. The former slaves do not like pride because it is the common characteristic the dominant whites that had enslaved them. The community sees pride in Baby Suggs and Sethe and therefore feels justified in punishing them. And just as the community first punishes Sethe, Morrison makes emphasizes the point that they must unite to help her in the end by exorcizing the ghost from 124. The community serves a very critical and involved purpose, playing the 'hero' and 'semi-villain' in Beloved. For the majority of the novel, the community is very harsh and unforgiving toward Sethe. After Baby Suggs' elaborate welcoming feast for Sethe, the community is so ashamed of their own gluttony that they blame the excessiveness on Baby Suggs. ...read more.

The community cannot understand the psychological effects and cannot act out against the whites so they displace their anger and frustration for slavery and whites onto Baby Suggs. They choose Baby Suggs and Sethe as the scapegoats because they are jealous of the two and they feel that they exhibit prideful behavior. The community is envious that Baby Suggs had been bought out of slavery by her son, given a two-story house by white people, and that Sethe escapes Sweet Home with all of her children. Firstly, the ties between slaves and their children were usually severed very early; the fact that Baby Suggs was able to share twenty-plus years with her son is incredibly shocking. While most of the slaves had to escape and Baby Suggs had been bought out and peacefully taken to Ohio also triggered envious feelings. Also the houses in the community were shabby and only one-level and they had worked extremely hard to obtain it. On the other hand, Baby Suggs' house was previously owned by white couple who gave it to her. The community feels as though Baby Suggs and Sethe act like white people because they act prideful. ...read more.

In her views, blacks still have the psychological effects of slavery and racism in how they view their status in the American society. One issue in the black community is that many still feel oppressed by whites; they feel that they still do not have the same rights and opportunities allotted to whites and therefore they are still not on the same level. Morrison encourages the black community identify the origins of these feelings. The community must first fully understand the issue and finally they must unite together to confront it and find a solution. The role of the community in Toni Morrison's Beloved is incredibly significant, playing both the 'hero' and the 'villain'. The former slaves are unable to deal with their emotions due to the devastating psychological effects of slavery, so the internal issue becomes an external one as they displace their anger and frustration onto Baby Suggs and Sethe. But the community must rise above their anger and jealousy to help Sethe and Denver. It is only the united community that can save Sethe as Morrison points out. And parallel to the feelings of the black community in the post-Civil War era, the same issues of white dominance continue in the modern black community. ?? ?? ?? ?? - 1 - ...read more.