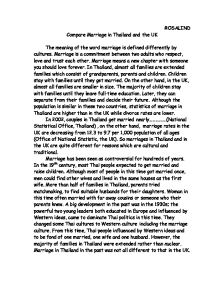 Compare Marriage in Thailand and the UK

ROSALIND Compare Marriage in Thailand and the UK The meaning of the word marriage is defined differently by cultures. Marriage is a commitment between two adults who respect, love and trust each other. Marriage means a new chapter with someone you should love forever. In Thailand, almost all families are extended families which consist of grandparents, parents and children. Children stay with families until they get married. On the other hand, in the UK, almost all families are smaller in size. The majority of children stay with families until they leave full-time education. Later, they can separate from their families and decide their future. Although the population is similar in these two countries, statistics of marriage in Thailand are higher than in the UK while divorce rates are lower. In 2002, couples in Thailand get married nearly................(National Statistical Office, Thailand) , on the other hand, marriage rates in the UK are decreasing from 12.3 to 9.7 per 1,000 population of all ages (Office of National Statistic, the UK). So marriages in Thailand and in the UK are quite different for reasons which are cultural and traditional. ...read more.

Some families tried matchmaking to find suitable husbands for their daughters. Young men and women often met by being introduced by family or friends as in Thailand. In the mid twentieth century, the majority of families in the UK were extended rather than nuclear. Consequently, extended families were decline because men and women in most families did not get on well with, they were quite different both work and social activities. So that, divorce rates were increase and 35 percent of children in this time came from broken home. The cultural and traditional both in Thailand and in the UK are quite different, so people's opinions of marriage are different too. Nowadays, more than half of women in Thailand study in a high level. They often want to graduate their degrees before they get married. So that average age of women in Thailand get married between 25 and 27, and average age of men get married between 26 and 28. They often have wedding ceremony because it means they have responsibilities and complete to be adult. For men, marriage is important because it means they have a new role as a head of family. ...read more.

In addition, more than half of them think it is not necessary to marry because they can stay together and get baby. From the BBC news, a survey suggests that less than half of all pregnant women and fathers think it important to be married before having a baby. On the other hand, there are more than half of women and men think it does not important to be married before having a baby. They think marriage is only a certificate but the best thing is their commitment to each other. This is the reason that why marriage in the UK is decreasing. In conclusion, marriage in countries varies from culture to culture. The backgrounds of countries affect their behaviour. Although there are many different cultures and ways of life between in Thailand and in the UK, for instance, the majority of families in Thailand are extended families while nuclear families in the UK, Children in Thailand stay with their families until they get married while children in the UK can stay with their partners if they want. However, whether Thailand or the UK, the most important things for two people who want to stay together are try to adapt them for staying for a long time, and have responsibilities in their families. 2 ...read more.