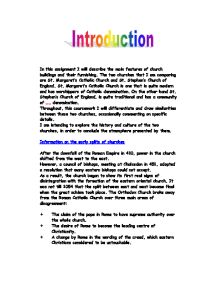 In this assignment I will describe the main features of church buildings and their furnishing. The two churches that I am comparing are St. Margaret's Catholic Church and St. Stephen's Church of England. St. Margaret's Catholic Church is one that is quite modern and has worshippers of Catholic denomination. On the other hand St. Stephen's Church of England, is quite traditional and has a community of ...... denomination. Throughout, this coursework I will differentiate and draw similarities between these two churches, occasionally commenting on specific details. I am intending to explore the history and culture of the two churches, in order to conclude the atmosphere presented by them. ...read more.

? A change by Rome in the wording of the creed, which eastern Christians considered to be untouchable. So Christendom broke into two parts. The Orthodox Church was formed and the breach between it and the catholic has never been healed. So the two churches that were split up were the st. Stephen's Church of England and st. Margaret's roman catholic church and although the furnishing and the main features are the same they all take a different meaning and symbolism. St. Stephen's Church of England Altar table- this is a holy table in the church where the bread and wine is blessed, however this is also used for communion which is celebrated in a way that people will take some time to just sit quietly and pray and to review their lives. ...read more.

Font- this is a sort of a big bowl, which full of holy water that is used for baptism, baptism is done on adults and children but the way it differs from the st. Margaret Roman Catholic Church is that it is very olden styled and the other churches font is made in a very traditional way. This reflects this because the church that have the modern font will have more people want to not take Christianity very seriously as much the church would the font more older. Baptism is quite important in Christianity because it tells people what Christianity is really all about and also for children baptism had just started because people thought that anabaptised babies would die infany and not go to heaven just born are being bought in the world of Christianity from darkness to light. Lectern- ...read more.