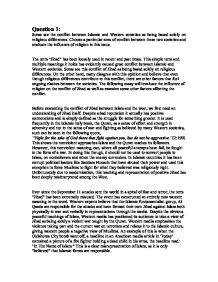 conflict between Islamic and West

Question 1: Some see the conflict between Islamic and Western societies as being based solely on religious differences. Choose a particular area of conflict between these two societies and evaluate the influence of religion in this issue. The term "Jihad" has been loosely used in recent and past times. This simple term and multiple meanings it holds has evidently caused great conflict between Islamic and Western societies. Some see this conflict of Jihad as being based solely on religious differences. On the other hand, many disagree with this opinion and believe that even though religious differences contribute to this conflict, there are other factors that fuel ongoing clashes between the societies. The following essay will evaluate the influence of religion on the conflict of Jihad as well as examine some other factors affecting the conflict. Before examining the conflict of Jihad between Islam and the west, we first need an understanding of Jihad itself. Despite a bad reputation it actually has positive connotations and is simply defined as the struggle for something greater. ...read more.

Western media emphasizes the violence taking part and the current war on terrorism and relates it to the Islamic culture, giving western people a negative view of Muslims. An example of this is when the Oklahoma City bomb went off, a headline in an American media article in 'Today' contained a picture of a fire fighter holding a dead child in his arms, the headline read: "In The Name of Islam." This is a clear misrepresentation of Islam, as it is only "believed" that Islamic forces are responsible. Jihad involves the two main Islamic groups, Sunni and Shi'ites. These are two very similar groups that differ only by an ancient belief that the Sunnis hold. This being that they do not acknowledge any innate political privilege to the decedents of 'Ali whereas Shi'ites do. Both groups practice the peaceful Jihad but the Jihad of war is normally associated with Shi'ites. This has been used in wars throughout the Middle East, in the Gulf War and against Western forces just to name a few. ...read more.

This bibliographical reference is the main article on Jihad which I found very useful when determining the types of Jihad as well as good for the history and other information on Jihad. This site has been beneficial to my research essay. 'Jihad': idea and history. Last modified on 1st May 2007. Patricia Crone. Accessed: 25 August 2008. <http://www.opendemocracy.net/faith-europe_islam/jihad_4579.jsp>. The article, written by knowledgeable scholar, author and historian of early Islamic history is an excellent text effectively discussing what Jihad means, how Islam was spread, Muslims, morality, and religious warfare in relation to Jihad. The article also describes the relevance of the previous topics to the modern world. This is a very valuable article as all the information in it benefits my essay. Class handout: Islam. By "Living Religion". Accessed: 24 August 2008, 26 August 2008. This handout is a very helpful text as it has based its information aroud the religion of Islam. The sections regarding Sunni and shi'ites as well as a detailed section on Jihad have helped me greatly in my research. In reading the whole of the booklet, it has given me a greater understanding of Islamic culture and society which has also benefitted my essay. ...read more.