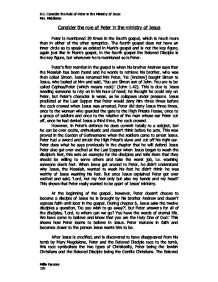 Consider the role of Peter in the ministry of Jesus

Consider the role of Peter in the ministry of Jesus Peter is mentioned 39 times in the fourth gospel, which is much more than in either of the other synoptics. The fourth gospel does not have an inner circle so to speak as existed in Mark's gospel and is not the key figure, again just like in Mark's gospel, in the fourth gospel the Beloved Disciple is the key figure, but whenever he is mentioned so is Peter. Peter's first mention in the gospel is when his brother Andrew says that the Messiah has been found and he wants to retrieve his brother, who was then called Simon. Jesus renamed him Peter, 'He [Andrew] bought Simon to Jesus, who looked at him and said, 'You are Simon son of John. You are to be called Cephas/Peter (which means rock).' (John 1.42). This is due to Jesus needing someone to rely on in his hour of need; he thought he could rely on Peter, but Peter's character is weak, as he collapses under pressure. ...read more.

washing someone else's feet. When Jesus got around to Peter, he didn't understand why Jesus, the Messiah, wanted to wash his feet he didn't think he was worthy of Jesus washing his feet. But once Jesus explained Peter got over excited and said, 'Lord, not my feet only but also my hands and my head!' This shows that Peter really wanted to be apart of Jesus' ministry. At the beginning of the gospel, however, Peter doesn't choose to become a disciple of Jesus he is brought by his brother Andrew and doesn't express faith until later in the gospel. During chapter 6, Jesus asks the twelve disciples a question, 'Do you wish to go away?', but Peter answers for all of the disciples, 'Lord, to whom can we go? You have the words of eternal life. We have come to believe and know that you are the Holy One of God.' This shows how Peter learns to believe in Jesus. ...read more.