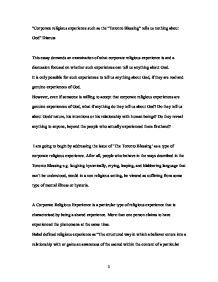 Freud believed the mind creates the illiusion that is religion of a way of dealing with the dangers of the outside world. For Freud religion was a neurotic illness arising out of the unconscious mind caused by repressed s****l neuroses. Karl Marx would also dismiss the experiences, believing that religion was "the opium of the people" - nothing more than a sedative to keep the people under control Although it is clear the movement has had a tremendous impact, is it the result of the Holy Spirit or hypnotism? Clark simply exploited the gulliability of the public, employing techniques used by cults to just "let the experience happen" or even bully them into experience the blessing? If God is responsible for such manifestations, what does this tell us about the nature of God? If God was responsible I believe this would be evidence for a rather neurotic God, possibly a God who would rather waste his power by granting demonic manifestations to believers to prove his power (even though "thought shall not test the Lord"), than curing suffering not so much in humanity but in animals and in nature, (human suffering is the price of free will). Manifestations from the Toronto Blessing do not conform with the traditional concept of God. By stepping back from the Blessing it is clear to see why we have the initial reaction of uneasiness, the blessing rests on faulty ideas about how God operates in the universe. It would be vary rare to find any Christian movement, no matter how controversial, from which no good as come and the Blessing is no exception, for what ever reason, people are feeling rejuvenated, emotionally cleansed and physically healed. We will probably never know if these so called "fruits" associated with the Blessing simply a spiritual placebo effect, or whether there has been some sort of divine intervention Should the non-believer simply dismiss the claims as some form of mass hysteria? If the blessing brings happiness to people does it really matter what caused such feelings? - I don't think so. ...read more.