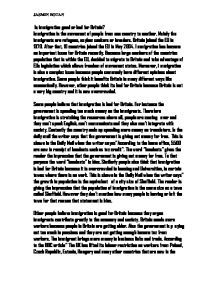 Is immigration good or bad for Britain? Immigration is the movement of people from one country to another. Mainly the immigrants are refugees, asylum seekers or invaders. Britain joined the EU in 1970. After that, 10 countries joined the EU in May 2004. Immigration has become an important issue for Britain recently. Because large numbers of the countries population that is within the EU, decided to migrate to Britain and take advantage of EUs legislation which allows freedom of movement states. Moreover, immigration is also a complex issue because people commonly have different opinions about immigration. Some people think it benefits Britain in many different ways like economically. However, other people think its bad for Britain because Britain is not a very big country and it is now overcrowded. Some people believe that immigration is bad for Britain. For instance the government is spending too much money on the immigrants. Therefore immigration is stretching the resources above all, people are coming over and they can't speak English, can't communicate and they also can't integrate with society. ...read more.

Britain needs more workers because people in Britain are getting older. Also the government is paying out too much in pensions and they are not getting enough income tax from workers. The immigrant brings more money in business links and trade. According to the BBC article" The UK has lifted its labour restriction on workers from Poland, Czech Republic, Estonia, Hungary and many other countries that are new in the EU". Therefore it is easy for immigrants from these countries to find a job. Immigrants comes to Britain and do jobs that people in the country don't want to do e.g. cleaning, building, factory jobs and so on. Moreover, Britain becomes a more multicultural society also we can share their cultures and try new foods from their homeland. The BBC article states that immigrants have been satisfied which the available facilities in Britain immigrants that arriving to Britain has a great deal of successes in earning money" there is a lot of work around", says 28 year old Pal Nemeth from Szeged, a Hungarian town south of Budapest." ...read more.

However in the BBC article the writer interviewed the actual immigrants that came to Britain to seek a better future. For example "it is hard not to find a job and it is really difficult to live without one", Says 28-year-old Pal from a Hungarian town south of Budapest. Immigration is clearly a controversial subject because people usually have different opinion about immigration. Although some people think immigration benefits Britain in many ways whereas, other thinks it's bad for Britain. I personally think immigration is both good and bad for Britain, firstly I think it's good for Britain because loads of immigrants have the opportunity to become successful in life. Moreover, it is also good for Britain because they do jobs that other people in the country don't want to do. Furthermore, immigrant brings different culture food from their homeland. On the other hand, I think it's bad because the percentage in crime and racism has increased highly over the last few years. Although people may disagree with my statement and think that immigration is entirely bad for Britain because they think that immigrants are flowing into Britain just to live on benefits without working themselves. ?? ?? ?? ?? JASMIN BOTAN ...read more.