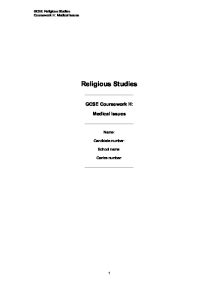 Religious Studies GCSE Coursework H: Medical Issues Name: Candidate number: School name: Centre number: Religion: Medical Issues Describe the treatments available to help infertile couples to have children. Infertility can be defined as the inability to become pregnant after 12 months or more of unprotected intercourse1. There are several treatments available to help infertile couples to have children, including in-vitro fertilization (IVF)2, artificial insemination by donor (AID)3, artificial insemination by husband (AIH)4 and surrogacy5. In IVF, ovum are withdrawn from the woman and fertilized with the man's semen outside the womb under laboratory conditions. To increase the chance of being able to extract multiple eggs at one time from the woman, fertility medications are prescribed. The eggs are then retrieved through a minor surgical procedure using ultrasound and a hollow needle. The eggs are then fertilized in a dish with sperm, which is obtained by ejaculation, and once the embryo has developed to the eight-cell stage around 48-72 hours after the retrieval6, it is then replaced in the womb. Surrogacy, or 'womb-leasing'7, is often used when a woman cannot become pregnant. In the case of partial, or traditional, surrogacy, the egg and sperm of the surrogate mother and intended father are fertilized by IVF and then placed into the surrogate mother's womb. The surrogate mother bears the child for the intended mother and father and hands the baby over after birth. Gestational or full surrogacy is similar. However, in this case, the egg comes from the intended mother, and a baby conceived by this method, will not have any biological connection to the surrogate mother. ...read more.

In addition to this, Christians believe that because life is a gift from God, it is sacred and therefore to be treated as holy and valued and preserved. As a result, Christianity teaches that the body is a temple and that as stewards of God's creation, we should treat our bodies with respect, refraining from whatever is harmful to them. In support of this perspective is the teaching in 1 Corinthians26 and because of this, Christians may believe that organ transplants are impermissible because they harm the body of the donor and do not preserve it. Furthermore, organ transplants often exploit the poor because rich people will pay for their organs, and Christians are against this because of catechisms which teach that the rich should not exploit the poor27. Islam, like Christianity, teaches that life comes from God, belongs to God and is sacred; Muslims believe that we have been trusted by God with our bodies, as seen in the Qur'an28. It is therefore wrong to sell, give or donate any organs from our bodies which are essentially God's because the organs of a human body are sacred and so should not be tampered with, meaning that to take benefit from any part of a human is unlawful (haram). Muslims believe this because of teachings in the Hadith29 and of the Imam Nawawi30 who explained this particular Hadith. Some religions accept organ transplants if no life is terminated intentionally, however, in Islam, a human body is sacred even after death and organ transplants even after death, according to teachings such as that in the Hadith31, are therefore against the Muslim beliefs. ...read more.

This could be a problem as it could affect future generations in negative unforeseeable and uncontrollable ways41. Furthermore, genetic engineering offers the chance for discrimination or prejudice because we would be able to see who was genetically to our advantage or disadvantage. Some Christians are opposed to genetic research and engineering because they believe that God has created the genetic make-up of each human being especially and at the moment of conception. This is due to teachings such as that in Jeremiah42. These Christians also believe that people have no right to interfere with God's will and that doing so is 'playing God' because of their beliefs in the sanctity of life, which tell them that our lives are essentially God's because of teachings in the Bible43. Some Muslims are also opposed to genetic research and engineering because they too believe that the genetic make-up of each individual is established by God. They believe that only God can alter that make-up and that scientists who try to create life are 'playing God', which is unforgiveable because they believe that only God has the right to grant life, as taught in the Surah44. For the above reasons, such as that of the sanctity of life and the many teachings on matters of life and death in relation to God, people may believe that genetic research and engineering are wrong, and it is because of this, that it can be concluded that yes, only God has the right to interfere with our genes. ...read more.