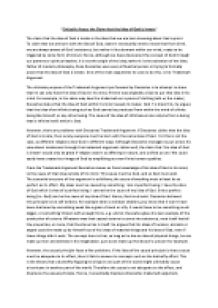 Critically Assess the Claim that the Idea of God is Innate

﻿?Critically Assess the Claim that the Idea of God is Innate? The claim that the idea of God is innate is the idea that we are born knowing about God a priori. To claim that we are born with the idea of God, doesn?t necessarily need to mean that from birth, we are always aware of God?s existence, but rather it lies dormant within our mind, ready to be triggered by some form of stimuli. Hence, although we have discovered the concept of God through our parents or spiritual leaders, it is not the origin of the idea; rather it is the activation of the idea. Father of modern philosophy, Rene Descartes was a very influential person in trying to formally prove that the idea of God is innate. One of the main arguments he uses to do this, is his ?Trademark Argument. The ultimate purpose of the Trademark Argument put forward by Descartes is to attempt to show that he can only have the idea of God in his mind, if there was originally a God to put that idea in his mind. For example, in the same way how the trademark on a piece of clothing tells us the maker; Descartes states that the idea of God within his mind reveals its maker, God. ...read more.

This is the theory that a butterfly flapping its wings in one part of the world might ultimately cause a hurricane in another part of the world. Therefore the cause is not adequate to the effect, and disproves the casual principle. Hence, it essentially disproves Descartes trademark argument, because the idea of God doesn?t necessarily have to come from an equally supreme being. Philosopher David Hume stated that we cannot determine the cause of anything simply by examining the effect. By saying this, Hume is effectively arguing against Descartes? causal principle. Hume says that just by seeing the window breaking, he can?t infer what must have caused it to break. In the example of the shattering window, it was stated that we know that something large, with enough force, must have been caused the window to shatter, but how can we know this? Hume claims that we can?t know this through a priori reasoning, but rather through recollection of a past experience of glass shattering. We have learned from experience, which sort of objects can cause the window to shatter. If we came across a shattering window for the first time, we wouldn?t know what caused it to occur. ...read more.

Thus we get the idea of God as an infinite being, innately. In conclusion, although Descartes had a fairly strong argument with the trademark argument, there were a few problems with it. If God was the cause of the concept of God in our minds, or the ?trademark?, then surely each and every person would have the same ?trademark?. Yet, everyone has a different concept of God, or different ?trademarks?. Furthermore, Descartes causal principle, which states that the cause of something must be as great as or superior to the effect, also faces some problems. One of the main problems to Descartes causal principle is that there are in fact effects that can be much greater than the cause, for example, a single match causing a whole bonfire. Philosophers like Hume have shown that you cannot work out the cause of something, by simply examining the effect. This is true because, for example, if you have never seen a window break before, then we can?t know through a priori reasoning alone that we need a large object with enough force. We can only know through experience. In the same way, we need to experience God coming into existence to actually know that he is the cause of our idea of God. ...read more.