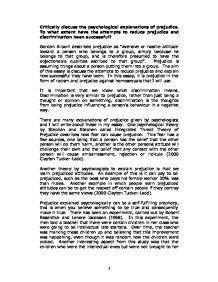 Critically discuss the psychological explanations of prejudice. To what extent have the attempts to reduce prejudice and discrimination been successful?

Critically discuss the psychological explanations of prejudice. To what extent have the attempts to reduce prejudice and discrimination been successful? Gordon Allport described prejudice as "aversive or hostile attitude toward a person who belongs to a group, simply because he belongs to that group, and is therefore presumed to have the objectionable qualities ascribed to that group". Prejudice is assuming things about a person putting them into a group. The aim of this essay is discuss the attempts to reduce prejudice and explain how successful they have been. In this essay, it is prejudice in the form of r****m and prejudice against homosexuals that I will use It is important that we know what discrimination means. Discrimination is very similar to prejudice, rather than just being a thought or opinion on something, discrimination is the thoughts from being prejudice influencing a person's behaviour in a negative way. There are many explanations of prejudice given by psychologists and I will write about these in my essay. One psychological theory by Stephan and Stephen called Integrated Threat Theory of Prejudice describes how fear can cause prejudice. This fear has a few sources, one being that a person has the belief that the other person will do them harm, another is the other persons attitude will challenge their own and the belief that any contact with the other person will cause embarrassment, rejection or ridicule (2000 Clayton Tucker-Ladd). ...read more.

As well as Jewish people, black people have also suffered terrible discrimination by whites. In the 1700's there was a huge business in the black slave industry. Black people were transported over to America and the Caribbean as slaves. Even though slavery was abolished around the 1800's this event in history has been the explanation of the discrimination that blacks encounter even today. In the USA, black people had no rights and were completely segregated out of white society purely for the fact they had black skin (Eddie Baker 1999) Over time black people have fought for their rights and the situation for them changed, they were given equal rights, however r****m still exists today. In modern society, people from every ethnic group want equality and harmony and attempts have been made to reduce prejudice and discrimination. One recommendation on how to reduce prejudice is to teach it in school to "prepare children to live in a peaceful world" Morton Deutsch (1993). His proposal uses several techniques, the first is cooperative learning, and this takes a few years. Conflict resolution is the second, constructive controversy is the third, and this is encouraging students to argue about issues in a way that "promotes critical and empathic thinking". The fourth aspect is mediation technique's this will help students resolve disagreements (Morton Deutsch 1993). Morton's recommendation is proposing the staff at school take the time and learn the skills needed to do the above in order to teach it to children at a young age, and this will reduce prejudice. ...read more.

Stonewall has also set up other sizable projects. Citizenship 21 was set up after a series of bombings that targeted minority groups in London in 1999, the project was officially launched in 2001. The aims were to increase awareness, build links with other communities, tackle prejudices and tackle homophobia (Citizenship 21 - Together for Equality 2004). The prejudice and discrimination aimed at homosexuals, and people of ethnic minority is mainly because of ignorance. Stonewall and other groups like it are providing information to everyone, which increases awareness and knowledge. The changes in society can be seen everywhere, for example, the amount of homosexuals on television has increased dramatically, increased tolerance by most, benefits for same s*x couples and it is more accepted in the church. If we can recognise the dangerous and persistent powers of prejudice then we as a society will be more equipped to deal with this serious and ongoing problem. If we can understand that prejudicial thinking can be overcome through our commitment and education then it will help bring people together and celebrate the differences of people. In the multicultural society that we live in there are so many groups with different cultural backgrounds, and we live in a society in which we could learn from each other's differences. Prejudices will always be around; if people took an interest in each other then this would decrease. It is important that studies on the subject continue to help our future society. ...read more.