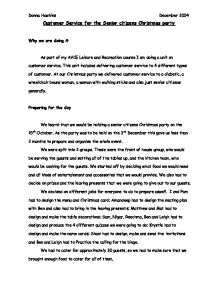 Customer Service for the Senior citizens Christmas party Why we are doing it As part of my AVCE Leisure and Recreation course I am doing a unit on customer service. This unit includes delivering customer service to 4 different types of customer. At our Christmas party we delivered customer service to a diabetic, a wheelchair bound woman, a woman with walking sticks and also just senior citizens generally. Preparing for the day We learnt that we would be holding a senior citizens Christmas party on the 15th October. As the party was to be held on the 3rd December this gave us less than 2 months to prepare and organise the whole event. We were split into 2 groups. These were the front of house group, who would be serving the guests and setting all of the tables up, and the kitchen team, who would be cooking for the guests. We started off by deciding what food we would need and all kinds of entertainment and accessories that we would provide. We also had to decide on prizes and the leaving presents that we were going to give out to our guests. ...read more.

He told us that when we were taking the drinks over to the guests that if we looked at the drink we were more likely to spill it than if we didn't look at the drink. After all of this had been told to us Andreas got us to set up a cover just as he and Phillip had done. Me with the cover I had set up The decorations at Darlaston Community Association (The Rec) On Wednesday 1st December at 1:00pm a small group of our form had to go to the Darlaston Community Association (The Rec) to put the Christmas decorations up ready for our Christmas party on 3rd December. There were 2 rooms that needed to be decorated and also the kitchen to be cleaned, as the mess was horrendous. We were split into 3 groups. The people who were to be working and cooking in the kitchen went and cleaned the kitchen. As there were more intermediate students than advanced students the intermediates decorated the larger room. There were only 4 advanced students to decorate the smaller room. The group included me, Matthew, Sam and Reechma. ...read more.

The first bit of entertainment that we did was the 4 games of bingo. These went down really well as the senior citizens love bingo. We let the winners of the bingo chose their own prizes, which were situated at the front of the hall. Afterwards we had the 4 quizzes. Once the first quiz was finished the answer sheets were collected in and myself and another student added up the scores whilst the second quiz was taking place and so on. Once all of the entertainment was finished one of the guests stood up to make a speech. She said that she and the other guests had had a wonderful time and she even told us that some of the guests had been to a hotel for a Christmas lunch and they said that ours was better. Leaving Time When all of the guests were leaving Amandeep and Pam gave out the leaving presents whilst I, Ben, Leigh, Mat and Matthew sang 'we wish you a merry Christmas.' All of the guests applauded us. After the guests had left we had to tidy up the room and put it how we came across it. The tables had to go back properly and also the kitchen had to be tided. We all left The Rec at around 2:30pm. ?? ?? ?? ?? Donna Hawkins December 2004 ...read more.