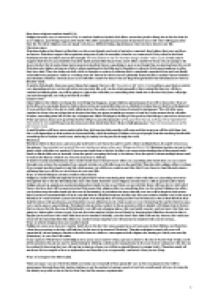 Death and Religion. Religions and Care for the Elderly.

﻿How does religion comfort death? (a) Religion in many ways is viewed as a way to comfort death and make it look like a somewhat positive thing due to the fact that for most religions, good things happen after death. This offers people hope and makes them feel at ease with what will happen after they die. For other religions you are simply re born as a different being, depending on what you have done in your life. Christian views Christians believe that there is a life after you die, even though your body is buried or cremated; they believe that your soul lives on forever. Christians support this argument using one of Jesus is examples when he was resurrected 3 days after he had died. Furthermore the use other sources for example ?He who believes in me will live even though he dies? ?John 11:25-26 this source suggests that there is an actual life even after death and just like the previous one it offers comfort for those who are going to die due to the fact that it makes them feel at ease knowing that there is something to go to even though they are leaving from this world. Christians also believe in heaven which is often mentioned in the bible and is thought as a place in which good people go to after they have died. They also believe in hell, which is thought as a place of suffering that is completely separated from god, and finally some believe in purgatory which is a waiting room for heaven in which you are spiritually cleansed (this is mainly roman Catholics and Christian orthodox, which in most cases will offer comfort for those who are ding through the fact that Christian know there is life after death. Overall in Christianity, there are many things that suggest that you will ?have eternal life? (john 3:16) ...read more.

Social service residential homes are often a choice made by old people who still want to be independent (they may have some disabilities), these homes are created by the government and are therefore similar to warden controlled units, the only difference is that there is no staff on site, therefore this offers a sense of independence to the elderly person(s) involved. These homes are often used by the elderly due to the fact that they are quiet cheap and convenient. Some of the benefits of these homes is that you are always around elderly people and that you get to live your life by yourself. Some of the negative aspects are that you sometimes require others help and you cannot get it, you may also cause harm to yourself if you accidently make a mistake. Nursing homes (either private or public) generally do the same thing. They provide all the needed service an elderly person may require for example, laundry, housekeeping and medical service. They also offer a range of different social and recreational activities. Most of the time a nursing home for an elderly person is quiet uncomfortable due to the fact that they do not get to have their own lives, they are constantly being scheduled by nurses etc. some of the positive aspects of a nursing home is that they are a good place to socialise with other elderly people, and similarly to other homes, they make the rest of the family’s life easier. Nursing homes will also ensure that everything the old person requires is fulfilled. The government provides a range of different way of caring for the elderly is a pension which gives a retired person (65 for men and women) a weekly amount of money of around £95.25 (and some extra money in winter for heating). Elderly people also get free transport. They also have special systems installed for these people in transportation systems which make their live somewhat easier. ...read more.

Other issues with old people are the fact they are very grumpy and like children have different mood swings therefore you would also have to deal with some of their emotional problems. In a modern family an old person would not understand how everything works and this may cause problems when they are getting used to all the new technology, therefore overall old people cause allot more problems if they are not as dependant. Although in some cases for example if the elderly person is terminally ill, the best solution would be to send that person to a hospice in which they can be looked after properly and this would therefore mean that no sudden problems are created. Generally old people are a big problem due to their requirements and the fact that they may be very costly to look after (if they have special requirements). Old people should not be looked after by family members mainly because the family is creating their own new life and that person may intervene and create waves of problems. Conclusion In my opinion old people should be looked after by the family even though they do cause some problems which can be sorted out easily, this is because they do not have much time left and the better thing to do would be to share the important years of your life with them, it will also mean you are doing something good and that you are growing spiritually or you are following what God intended you to, overall, there are not that many reasons why you should not look after you elderly parents unless they are terminally ill, in which case the better thing to do would be to send them to a hospice. (In my opinion I believe a nursing home is not a great place due to the fact they try to cut corners and most of the time half jobs are done which would cause harm to the family member)? ...read more.

This student written piece of work is one of many that can be found in our GCSE Christianity section.