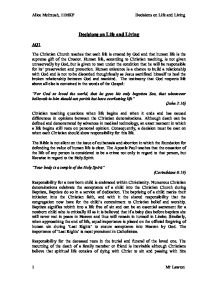 Decisions on Life and Living

Decisions on Life and Living AO1 The Christian Church teaches that each life is created by God and that human life is the supreme gift of the Creator. Human life, according to Christian teaching, is not given unreservedly by God, but is given to man under the condition that he will be responsible for its' preservation and protection. Human existence is a chance to build a relationship with God and is not to be discarded thoughtlessly as Jesus sacrificed himself to heal the broken relationship between God and mankind. The testimony that God respects life above all else is contained in the words of the Gospel: "For God so loved the world, that he gave his only begotten Son, that whosoever believeth in him should not perish but have everlasting life" (John 3:16) Christian teaching questions when life begins and when it ends and has caused differences in opinions between the Christian denominations. Although death can be defined and demonstrated by advances in medical technology, an exact moment in which a life begins still rests on personal opinion. Consequently, a decision must be cast on when each Christian should show responsibility for this life. The Bible is not silent on the issue of euthanasia and abortion in which the foundation for defending the value of human life is clear. The Apostle Paul teaches that the cessation of the life of any person is considered to be a crime not only in regard to that person, but likewise in regard to the Holy Spirit. ...read more.

In Catholic ideology human life begins at the moment of conception. From that moment the unborn baby's life is sacred and God-given, and its protection should be paramount. The bible states that life begins in the mother's womb; "For you created my inmost being: you knit me together in my mothers womb." (Psalm 139) Modern science proves that the baby is a separate human being from conception. It is never just a part of his or her mother's body and although in the womb it deserves the same level of protection as any other member of the human family. With this understanding, the Catholic denomination believes that abortion and euthanasia are morally unacceptable: it is murder and contrary to the dignity of human beings; destroying respect that is due to God. Furthermore, the Pope believes euthanasia and abortion to be 'a grave violation of the law of God': the Church's concern being to bring the light and life of Christ to everyone who needs it. Other Christian denominations, in particular Roman Catholicism, encourage support of hospices as a compassionate alternative to euthanasia. Specialising in pain control, the aim of the hospice movement is to give people with painful terminal diseases the best possible quality of life. Dame Cicely Saunders founded the first modern hospice in 1967 on the principles of caring for the sick, researching into pain control, searching for cures for diseases and teaching nurses and doctors how to cope with terminal disease. ...read more.

(John 8:7) It would therefore follow that Christians should not suggest that one man's morals are unparalleled to those of Christianity. On the other hand it could be said that Christians should always have the capability to voice their opinion and be respected for it. It can be understood that if Christianity feels so strongly about the 'Sanctity of Life' that Christians would take advantage of every opportunity presented to them by which they could argue their beliefs. However to what extent may the public make known their opinion on certain aspects of life? At what instance does opinion become blasphemous and divisive? Free speech and the right to pass personal judgment regularly causes disarray within the USA where Pro-Life groups feel so passionately about the injustice of abortion that they take to the street to argue their case. However the Pro-Life campaign goes to extreme lengths to protest against abortion laws. Relentlessly, the campaigners threaten to shoot surgeons and nurses who carry out the legal procedure, defending their actions with the argument that medics are willing to murder a living foetus and therefore lack care for human life. In conclusion, the beliefs we continue to develop provide a framework within which we consider issues and comprehend where we stand on them, these beliefs change and evolve over time as we encounter new ideas and learn through new experiences, therefore personally I advocate choice and believe that everybody has the right to voice their own opinion as long as they don't suppress opposing attitudes or impose their own on others. ?? ?? ?? ?? Alice McIntosh, 11MKP Decisions on Life and Living 1 Mr Lawton ...read more.