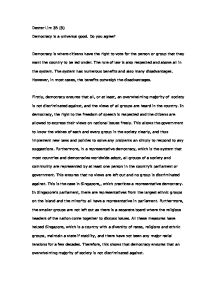 Democracy is a universal good. Do you agree?

Dexter Lim 3B (8) Democracy is a universal good. Do you agree? Democracy is where citizens have the right to vote for the person or group that they want the country to be led under. The rule of law is also respected and above all in the system. The system has numerous benefits and also many disadvantages. However, in most cases, the benefits outweigh the disadvantages. Firstly, democracy ensures that all, or at least, an overwhelming majority of society is not discriminated against, and the views of all groups are heard in the country. In democracy, the right to the freedom of speech is respected and the citizens are allowed to express their views on national issues freely. This allows the government to know the wishes of each and every group in the society clearly, and thus implement new laws and policies to solve any problems an simply to respond to any suggestions. Furthermore, in a representative democracy, which is the system that most countries and democracies worldwide adopt, all groups of a society and community are represented by at least one person in the country's parliament or government. ...read more.

Voters are also allowed to vote freely, and as the right to freedom is respected, voters that support different political parties may begin to go against each other probably starting with a small war of words on the internet or on the street then developing into something as major as a nationwide riot and emergency, and sometimes even a military coup. This was the case in Thailand. Thailand was experiencing a period of stability for a decade to the start of the 21st century. However, a few groups of Thais were unhappy with the premier's policies, which helped the poor and the working class. These groups were made up of influential and rich businessmen, and one time, when the premier was not in the country, the group forcefully took hold of the country through a military coup. This has led to many protests and riots between the supporters of the former premier and the anti-premier supporters. For the past few years, airports have been closed, and the tourism industry of Thailand has been severely affected as a result. ...read more.

Democracy is able to ensure a country remains stable, but on the other hand, the system may backfire, as seen in the case of Thailand, and cause the country to become unstable. However, the government of the country has the ability to implement new policies and laws to solve the problems and pull the country back into a state of stability. Therefore, though democracies might experience instability, the period of instability is most likely to be short-lived and it will just be a matter of time before stability, peace and harmony returns to the country. On the other hand, once a country enters a state of stability, it is difficult for it to become unstable as non citizen or person would want riots and war in the country. Therefore, periods of stability are most likely to be a regularly term thing as seen in the cases of Singapore and the United States of America, whom there has been a continuous period of stability for years and decades. Therefore, democracy is a universal good as it brings about stability long-termed and democracy ensures that all, or at least, an overwhelming majority of society is not discriminated against. ...read more.