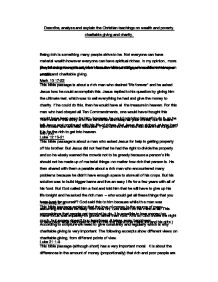 Describe, analyse and explain the Christian teachings on wealth and poverty charitable giving and charity.

Describe, analyse and explain the Christian teachings on wealth and poverty charitable giving and charity. Being rich is something many people strive to be. Not everyone can have material wealth however everyone can have spiritual riches. In my opinion, more people should be spiritually rich because material things are useless in the eyes of God. The following excerpts are taken from the bible, and they show different views on wealth and charitable giving. Mark 10:17-22 This bible passage is about a rich man who desired "life forever" and he asked Jesus how he could accomplish this. Jesus replied to his question by giving him the ultimate test, which was to sell everything he had and give the money to charity. If he could do this, then he would have al the treasure in heaven. For this man who had obeyed all Ten Commandments, one would have thought this would have been easy for him, however, he could not bring himself to do it, so he left Jesus and continued with his life of riches. ...read more.

It is possible to love money too much, but money doesn't buy happiness, it takes away happiness. According to scripture we need to give constantly and regularly which is why charitable giving is very important. The following excerpts show different views on charitable giving, from different points of view. Luke 21:1-4 This bible passage (although short) has a very important moral. It is about the differences in the amount of money (proportionally) that rich and poor people are willing to give to help others. Jesus tells us how rich people tend to only put the money they don't require into the temple moneybox, whereas a poor widow gave everything she had, although it was only a very small amount of money. The widow is an example of someone who is spiritually rich through her detachment of material possessions. Luke 16:19-31 This bible passage is about two men - one who is rich and another who is poor (Lazarus) and how their fortunes are reversed once they both die. ...read more.

The Church of England supports the Brandt reports message which is of the mutual interdependence between rich and poor all over the world. That basically means that for humanity to survive, then the world needs a fairer system of economic relationships between nations to benefit all countries. The Roman Catholic Church believes that the poor, (who as a consequence of their status are forced to suffer oppression and powerlessness) receive special attention in God's eyes and will be rewarded in heaven. In conclusion, material wealth is unnecessary to get into heaven, in fact it is bound to ensure refusal to the Kingdom of God. It is important that we know this because for many people, going to heaven is their life's ambition, and so knowing how to do it is a key feature. Also, knowing ones churches views on poverty and their solutions can help one to lead a fulfilling life according to the religion they follow, and knowing other peoples religious views can help one to understand why people do what they do. Understanding other people is important for the development of society. Abbie Taylor ...read more.