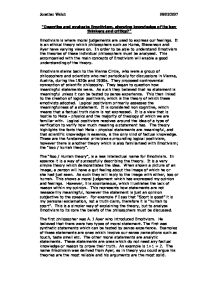 &quot;Describe and evaluate Emotivism, showing knowledge of its key thinkers and critics?&quot;

"Describe and evaluate Emotivism, showing knowledge of its key thinkers and critics?" Emotivism is where moral judgements are used to express our feelings. It is an ethical theory which philosophers such as Hume, Stevenson and Ayer have varying views on. In order to be able to understand Emotivism the theories of these individual philosophers must be analysed. This accompanied with the main concepts of Emotivism will enable a good understanding of the theory. Emotivism stems back to the Vienna Circle, who were a group of philosophers and scientists who met periodically for discussions in Vienna, Austria, during the 1920s and 1930s. They proposed controversial conception of scientific philosophy. They began to question how meaningful statements were. As such they believed that no statement is meaningful unless it can be tested by sense experience. This then linked to the creation of logical positivism, which is the theory of which these emotivists adopted. Logical positivism primarily assesses the meaningfulness of a statement. It is considered non cognitive, which means that a factual truth claim is not expressed. ...read more.

Examples of these statements are ones which involve our sense perceptions such as touch, taste smell etc. The other moral statements are analytic statements. These statements are ones which do not need any factual knowledge or reason to prove their truth. An example is 1+1 = 2. The name Emotivism was derived from Ayer, so in theory you could argue his theories are the most reliable and his arguments are the most solid. The Philosopher David Hume has a contribution to Emotivism. The idea of verification revolves around his influence. He believed that when we make a moral decision we do it out of sentiments. This is due to the feelings that we have. We all have different levels of compassion which influences the decisions we make. Regardless of this, there is no relation to reason when considering moral statements. This leads to the fact that the decisions we make are in the spare of the moment, without any consideration of the consequences and outcomes, there is no reason only our emotions telling us that something is right. ...read more.

Hume believed that the statements we make are just exclamations through sentiment, although it may be meaningless, it provides the speaker with the security that they are doing the right thing, and as such bringing them closer to being a virtuous person. Another response to Emotivism is that of James Rachel's, who criticised the emotive theory. He states that reason is always a factor, and as such disagrees with Ayer. He says that Ayer is wrong to draw parallels with the "ouch" reaction from stubbing your toe, and the "that's wrong" reaction to moral statement. He maintains that there is a lot more to a moral statement then simply a feeling. He believes that moral judgement relies on reason. For example, if you say euthanasia is wrong requires reason otherwise it is an arbitrary statement. In conclusion, Emotivism is a theory where moral judgements are used to express our emotions. Many philosophers feel differently about why we make moral statements, and in essence a statement is not meaningful, unless it can be verified by our sense perceptions. By analysing the views and opinions of the philosophers, a sound and concise evaluation has been produced. ?? ?? ?? ?? Jonathan Welch 08/05/2007 ...read more.