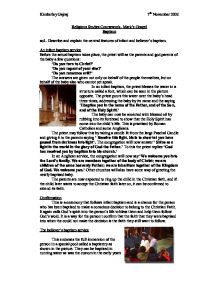 Describe and explain the central features of infant and believers baptism.

Religious Studies Coursework- Mark's Gospel Baptism ao1- Describe and explain the central features of infant and believer's baptism. An infant baptism service Before the actual baptism takes place, the priest will as the parents and god parents of the baby a few questions: 'Do you turn to Christ?' 'Do you repent of your sins?' 'Do you renounce evil?' The answers are given not only on behalf of the people themselves, but on behalf of the baby also who cannot yet speak. In an infant baptism, the priest blesses the water in a structure called a font, which can be seen in the picture opposite. The priest pours this water over the baby's head three times, addressing the baby by its name and the saying 'I baptise you in the name of the Father, and of the Son, and of the Holy Spirit.' The baby can now be anointed with blessed oil by rubbing into its forehead to show that the Holy Spirit has come into the child's life. This is practised by Roman Catholics and some Anglicans. The priest may follow this by taking a candle lit from the large Paschal Candle and giving it to the parents saying ' Receive this light. his is to show tat you have passed from darkness into light'. The congregation will now answer ' Shine as a light in the world in the glory of God the father.' To this the priest replies 'God has received you by baptism into his church.' ...read more.

The element that links all baptism is water, and people who are dipped beneath water are meant to be cleansed from sin. The idea of baptism was soon linked to membership with the church, and support of this can be seen in the Bible, such as Galatians 3:28 'For all of you who were baptised into Christ have clothes yourselves with Christ'. Infant Baptism The most well- known baptism is that of Jesus, who was baptised by John the Baptist in the River Jordan. Jesus had reached adulthood by this time, which was the age that everyone at the time of Jesus was baptised, and baptism in the much earlier ages most closely resembles believer's baptism. Infant baptism only really became popular in the 4th century when Christian families baptised their babies for fear that unbaptised babies who died would not enter heaven (the infant mortality rate at this time was high). Nowadays, the different churches that practise infant baptism see the baptism as a sacrament, which is a channel of God's love. They believe that from the outward actions performed on them, God's spirit flows into their lives and a significant change takes place inside them. When the sacrament takes place, and God's spirit flows into their lives, the person in born again, made more sensitive to God's plan, turning from their old life and committing themselves to God. Seeing baptism as a sacrament in referral to infant baptism is slightly difficult, because the baby does not understand the meaning of the service. ...read more.

Those who practise infant baptism would probably say to this that the chance for the person to openly confess to the Christian faith comes later at confirmation, where the person can then extend their relationship with God and make a conscious decision to follow Christianity. Confirmation also allows the person to learn a lot more about what they are about to commit to, making sure they fully understanding what is happening in the service and the significance. But it could still be said that the baptism of babies could be skipped out and the person could only be baptised when the were sure that they wanted to follow Christianity. Why baptise a baby when it will not know what is happening? I personally think that babies should be baptised. I think that the progression from baptism to confirmation is a good way of marking the stages in a person's life- from ignorance of Christianity but still sharing a connection with the church to being able to make a conscious and positive decision to follow Christianity. It gives the person a certain feeling of responsibility and makes them feel as though they are growing up and progressing spiritually. I think infant baptism provides a firm foundation on which to build the baby's faith, and gives the baby a spiritual connection with God. The baby does not need to understand the meaning of a sacrament, God's love will be just as strong, and I think that everybody should have a chance to share God's love and membership with the church, regardless of their age. ...read more.