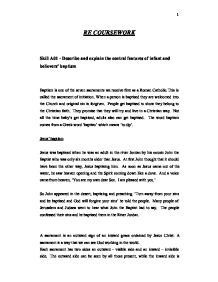 Describe and explain the central features of infant and believers&amp;#146; baptism

RE COURSEWORK Skill A01 - Describe and explain the central features of infant and believers' baptism Baptism is one of the seven sacraments we receive first as a Roman Catholic. This is called the sacrament of initiation. When a person is baptised they are welcomed into the Church and original sin is forgiven. People get baptised to show they belong to the Christian faith. They promise that they will try and live in a Christian way. Not all the time baby's get baptised, adults also can get baptised. The word baptism comes from a Greek word 'baptizo' which means 'to dip'. Jesus' baptism Jesus was baptised when he was an adult in the river Jordan by his cousin John the Baptist who was only six months older than Jesus. At first John thought that it should have been the other way, Jesus baptizing him. As soon as Jesus came out of the water, he saw heaven opening and the Spirit coming down like a dove. And a voice came from heaven, 'You are my own dear Son. I am pleased with you.' So John appeared in the desert, baptising and preaching. 'Turn away from your sins and be baptised and God will forgive your sins' he told the people. ...read more.

Then there are three blessings after to finish the ceremony. Believers Baptism "Born with a fallen human nature and tainted by original sin, children also need of new birth in baptism to be freed from the power of darkness and brought into the realm of the freedom of the children of God, to which all men are called. The sheer gratuitousness of the grace of salvation is particularly to them." Catechism 1250 If someone was not baptised as a child they can be baptised later on in life, this is called a believers baptism. This type of Baptism is very similar to Jesus' own baptism. An adult makes the decision to be baptised and attends a series of classes to prepare themselves for this event. It is important that they attend the classes so that they fully understand the commitment that they are about to make. The candidate is usually dressed in a white gown and is fully immersed which means to dip the person in to water. They believe that when they get baptised it will get rid of the sin they had when they were born and after you get baptised this will be a new start of life. ...read more.

Then again most parents want there child to be baptised when they are young so that their child will know about God at the beginning of their life's. If you want to be brought up as a Catholic and to follow God's life the only thing to do is get baptised when you are a child and not to sin. If you wait until you are 15 or 16 to get baptised are maybe not get baptised at all you are living with original sin inside you. After I have looked at the different points I don't think that baptising babies is pointless, I think that all children should be baptised when they are a child so that all of them will be brought up in the Catholic Church and believing in God. In some ways I agree that you should wait until you can understand the meaning and significances of getting baptised but if you wait you have lived for years with original sin inside you. Another reason if you don't get baptised as a child then you can't be called a Christian until you have been baptised. In conclusion I feel that parents, Godparents and priests should encourage children to be baptised at a young age. ?? ?? ?? ?? 1 ...read more.