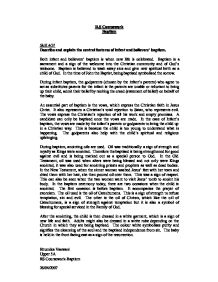 Describe and explain the central features of infant and believers' baptism.

R.S Coursework Baptism Skill AO1 Describe and explain the central features of infant and believers' baptism. Both infant and believers' baptism is when new life is celebrated. Baptism is a sacrament and a sign of the welcome into the Christian community and of God's welcome. Baptism is believed to wash away sins and give new spiritual birth as a child of God. In the time of John the Baptist, being baptised symbolised the sorrow. During infant baptism, the godparents (chosen by the infant's parents) who agree to act as substitutes parents for the infant is the parents are unable or reluctant to bring up their child, admit their belief by reciting the creed (statement of belief) on behalf of the baby. An essential part of baptism is the vows, which express the Christian faith in Jesus Christ. It also represents a Christian's total rejection to Satan, who represents evil. The vows express the Christian's rejection of all his work and empty promises. A candidate can only be baptised once the vows are made. In the case of Infant's baptism, the vows are made by the infant's parents or godparents to bring the child up in a Christian way. ...read more.

renounce evil" They are then asked three questions * Do you believe and trust in God the Father who made Heaven and Earth? * Do you believe and trust in his Son Jesus Christ who redeemed mankind? * Do you believe and trust in his Holy Spirit who gives life to the people of God? They must answer each of these "I believe and trust in Him" Believer's Baptism is the baptism of those who are old enough to understand the meaning of baptism and what they are about to do. This is usually done in their late teens. However, there is no minimum age. Believer's baptism is practised in the Baptist church, Evangelical and Pentecostal churches. It is believed that those who are baptised must be able to understand what they are doing. During believer's baptism, the candidate is put under total immersion. The baptised goes down into a pool leaving their old sinful life behind them. When the person is in the water, it represents the person dying and buried with Christ. The person then comes out of the water to share a new life with Christ (in the life he had after resurrection). Skill AO2 Explain the meaning and significance of baptism for Christians today. ...read more.

They think that it is unfair to baptise babies because they are unable to make their own response to Jesus. This seems to undervalue repentance (regret) and commitment which without, a person is not a Christian. Fundamentalists believe that baptism is for adults and older children, because it is administered only after one has 'accepted Jesus Christ as his personal Lord and Saviour'. However, I believe Confirmation allows a person to make a decision about their religion and that parents have to make a lot of decisions on behalf of their children. If God welcomes a person into the church by baptism, then why should a child be denied this privilege. By baptising a baby, the child will have support of the Christian community right form thee start of their life. If Baptism is a sign of an inward grace, why should this gift from God be withheld until later. When a child is baptised, you know that because of the promises made by the parents to bring up their child to believe in Jesus and to pray to him and to follow him, they will live their life in the way God wanted. St. Augustine expressed some strong views in favour of infant baptism. He believed that a Christian needed God's grace to gain salvation and come face to face with God, so unbaptised children were unable to meet God in their after life. ...read more.