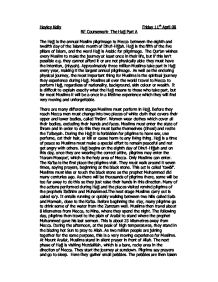 RE Coursework- The Hajj Part A

The Hajj is the annual Muslim pilgrimage to Mecca between the eighth and twelfth day of the Islamic month of Dhu’l-Hijjah. Hajj is the fifth of the five pillars of Islam, and the word Hajj is Arabic for pilgrimage. The Qur’an wishes every Muslim to make the journey at least once in their life, but if this isn’t possible e.g. they cannot afford it or are not physically able they must have the intention, (niyyah). Approximately three million Muslims take part in Hajj every year, making it the largest annual pilgrimage. As well as the enduring physical journey, the most important thing for Muslims is the spiritual journey they experience during Hajj. Muslims all over the world travel to Mecca to perform Hajj, regardless of nationality, background, skin colour or wealth. It is difficult to explain exactly what the Hajj means to those who take part, but for most Muslims it will be a once in a lifetime experience which they will find very moving and unforgettable.

There are many different stages Muslims must perform in Hajj. Before they reach Mecca men must change into two pieces of white cloth that covers their upper and lower bodies, called ‘ihrām’. Women wear clothes which cover all their bodies, excluding their hands and faces. Muslims must enter the state of Ihram and in order to do this they must bathe themselves (Ghusl) and recite the Talbeyah. During the Hajj it is forbidden for pilgrims to have sex, use perfume, cut their hair, or kill or cause harm to any living thing. Hajj is a time of peace so Muslims must make a special effort to remain peaceful and not get angry with others. Hajj begins on the eighth day of Dhu’l-Hijjah and on this day, once they are wearing the correct attire, pilgrims may enter the ‘Haram Mosque’, which is the holy area of Mecca. Only Muslims can enter. The Ka’ba is the first place the pilgrims visit. They must walk around it seven times, saying prayers, beginning at the black stone. This act is called ‘tawāf’. Muslims must kiss or touch the black stone as the prophet Muhammed did many centuries ago. As there will be thousands of pilgrims there, some will be too far away to do this so they just raise their hands in this direction. Many of the actions performed during Hajj and the places visited remind pilgrims of the prophets Ibrāhim and Muhammed.The next stage Muslims carry out is called sa’y. It entails running or quickly walking between two hills called Safa and Marwah, close to the Ka’ba. Before beginning the s’ay, many pilgrims go to drink some of the water from the Zamzam well. Muslims then travel about 8 kilometres from Mecca, to Mina, where they spend the night. The following day, pilgrims then travel to the plain of Arafat to stand where the prophet Muhammed gave his last sermon. This is about 25 kilometres away from Mecca. During the afternoon, at the peak of high temperatures, they stand in the blazing hot Sun to pray to Allah. As two million people are joining together for the same purpose, this is a very moving experience for Muslims. At Mount Arafat, Muslims stand in silent prayer in front of Allah. The next phase of Hajj is visiting Muzdalifah, which is a bare, rocky area in the direction of Mecca. They start the journey at sundown. Pilgrims say prayers and go to sleep.  Here they gather small pebbles. The pebbles are then taken to Mina the next day where they are used to throw at three stone pillars that represent the Devil. The Hajj ends with Id-ul-Adha, the festival of sacrifice. An animal is offered for sacrifice by each Muslim family. Most of the meat from the animal is given to the poor and any leftovers are shared with other pilgrims. After this act, pilgrims now dress in their usual clothes again and have a haircut. Male pilgrims usually shave their heads or cut their hair, and women just cut off a lock of hair. Muslims stay in Mina for another three days to pray further, throw stones at the devil and remember Allah. Also, they return to Mecca to walk around the Ka’ba again. They also drink as much water as they can from the Zamzam Well. Then the Hajj is over and Muslims may travel home if they wish. Many usually choose to stay longer and visit other important areas in the area, for example; before returning home, large numbers of pilgrims may go to Medina to visit the prophet Muhammed’s mosque and tomb if they choose to.