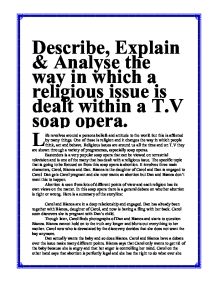 Describe, Explain &amp; Analyse the way in which a religious issue is dealt within a T.V soap opera.

Describe, Explain & Analyse the way in which a religious issue is dealt within a T.V soap opera. L ife revolves around a persons beliefs and attitude to the world but this is affected by many things. One of these is religion and it changes the way in which people think, act and behave. Religious issues are around us all the time and on T.V they are shown through a variety of programmes, especially soap operas. Eastenders is a very popular soap opera that can be viewed on terrestrial television and is one of the many that has dealt with a religious issue. The specific topic that is going to be focused on from this soap opera is abortion. It involves three main characters, Carol, Bianca and Dan. Bianca is the daughter of Carol and Dan is engaged to Carol. Dan gets Carol pregnant and she now wants an abortion but Dan and Bianca don't want this to happen. Abortion is seen from lots of different points of view and each religion has its own views on the matter. In this soap opera there is a general debate on whether abortion is right or wrong. ...read more.

In this final scene you can see Bianca's baby, Ricky and her partner Dan. Also between the conversation of Carol and Bianca, scenes are constantly being switched to show a contrast between a happy family and the situation with the abortion. This specific story is a religious issue because it deals with a situation that can be changed due to religious ideas. For example, if Carol happened to be Roman Catholic there would be a great chance that she would have decided not to have an abortion. This is so because the Roman Catholic Church believes that life is a gift from God and should not interfere because it is holy. Roman Catholics also believe that life starts at contraception therefore abortion is a form of murder, from here another debates arises. There are different opinions on when life begins, Roman Catholics believe it is contraception while other people believe it is when the main features of the baby have started to develop and can be seen. Other Christians also have views on abortion. The Church of England and Methodist Church believe that abortion is wrong but have some acceptions. ...read more.

Using a soap opera is a really good method of putting the message across because many people can relate to the events that take place in them. When the script is followed not many religious aspects can be seen, in actual fact there are none! But this story is a religious issue because opinions are changed by religion. Even if religion was not included in the soap opera, Carol's decision still would have been affected by her religious beliefs. So religion was applied to the soap opera but indirectly. Though including religious aspects would have been a good idea because the audience then could straight away recognise that abortion is a religious issue. Showing Carol's decision being affected by religion would also have been a good idea for the same reason. If I could deal with this issue I will use documentary style programme. I will not refer to using a talk show because there will be too many topics and views to consider. Using this method will also bore the audience, as they will have to take in a lot of information. With a documentary I can move step by step to different views and points and then summarise at the end of the programme for a final effect. ...read more.