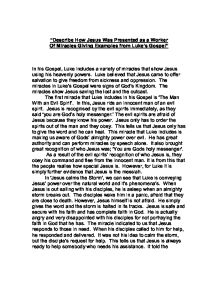 &quot;Describe How Jesus Was Presented as a Worker Of Miracles Giving Examples from Luke's Gospel.&quot;

"Describe How Jesus Was Presented as a Worker Of Miracles Giving Examples from Luke's Gospel" In his Gospel, Luke includes a variety of miracles that show Jesus using his heavenly powers. Luke believed that Jesus came to offer salvation to give freedom from sickness and oppression. The miracles in Luke's Gospel were signs of God's Kingdom. The miracles show Jesus saving the lost and the outcast. The first miracle that Luke includes in his Gospel is 'The Man With an Evil Spirit'. In this, Jesus rids an innocent man of an evil spirit. Jesus is recognised by the evil spirits immediately, as they said 'you are God's holy messenger.' The evil spirits are afraid of Jesus because they know his power. Jesus only has to order the spirits out of the man and they obey. This tells us that Jesus only has to give the word and he can heal. This miracle that Luke includes is making us aware of Gods' almighty power over evil. He has great authority and can perform miracles by speech alone. It also brought great recognition of who Jesus was; 'You are Gods holy messenger'. As a result of the evil spirits' recognition of who Jesus is, they obey his command and flee from the innocent man. ...read more.

Jairus is distraught and Jesus, being a truly compassionate person, responds to Jairus' heartache. He sees how unhappy Jairus is and as an act of love, he brings his daughter back to life. This story shows the depth of God's love. When Jesus sees Jairus his own heart is also touched with grief and sorrow. The miracle does not only show Jesus' ability to perform the impossible, but also that Jesus has a genuine love and compassion for Jairus and the whole human race. The miracle demonstrates to people something of the power of God and how much God cares for us. On his way to Jairus' house, Jesus shows his power over illness. There is a woman who is suffering with continuous haemorrhages. She has marvellous faith in God and genuinely believes that Jesus can cure her. She had been classified as dirty by her society and considered unclean to worship publicly by all those around her. She touches Jesus' cloak and from her touch he is able to recognise the great faith she has in him. So, with one simple touch she is healed, through Jesus. The importance of this story is shown by the persistence of the woman. Jesus did not want to embarrass the woman, but he did not want her to feel that it was just his power that had helped her, but also the faith that she had in him. ...read more.

The centurion's faith became part of Jesus' miracle. It was not only the healing which was important but also the fact that the centurion recognised Jesus' healing ability came from God. The miracle helped people to have faith in God and therefore brought them closer to God's kingdom. In "Jesus raises a Widows' Son", Jesus was in Nain when he witnessed a funeral procession for the son of a widow. He saw how distraught she was and with a touch of Jesus' hand the boy woke, alive. This miracle is important because it backs up the teaching that the "kingdom of God" was coming through his life and his work. It brought great recognition of who Jesus was, as people shouted, "God has come to save his people". The most important reason that Jesus worked miracles was to prove to people that God was coming through him to offer salvation. Some miracles were performed to show the power of God and his kingdom and to give people a taste of what the kingdom of God is really like. These miracles are the direct intervention of God. In them, evil, sickness, and natural phenomena's are all being overcome or harnessed in some way. Jesus was a very powerful individual and Luke wants us to know, from the miracle stories, that there is nothing that Jesus cannot do with the help of God. ...read more.