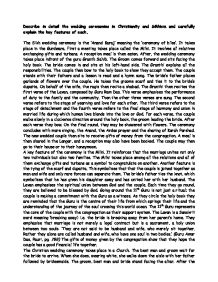 Describe in detail the wedding ceremonies in Christianity and Sikhism and carefully explain the key features of each.

Describe in detail the wedding ceremonies in Christianity and Sikhism and carefully explain the key features of each. The Sikh wedding ceremony is the 'Anand Karaj' meaning the 'ceremony of bliss'. It takes place in the Gurdwara. First a meeting takes place called the Milni. It involves all relatives exchanging gifts and turbans. A reception meal is then eaten. After, the wedding ceremony takes place infront of the guru Granth Sahib. The Groom comes forward and sits facing the holy book. The bride comes in and sits at his left-hand side. The Granthi explains all the responsibilities. The couple then bow to the holy book to show they accept them. The couple stands with their fathers and a lesson is read and a hymn sung. The bride's father places garlands of flowers over the couple. He takes the grooms scarf and ties it to the bride's dupatta. On behalf of the wife, the ragis then recite a shabad. ...read more.

The Lavan emphasises the spiritual union between God and the couple. Each time they go round, they are believed to be blessed by God. Going around the 11th Guru is not just a ritual; the couple is making a commitment with the Guru as a witness. As they circle the holy book they are reminded that the Guru is the centre of their life from which springs their life and the understanding of the journey of the soul crossing this world ocean. The 11th Guru represents the core of the couple with the congregation as their support system. The Lavan is a Sanskrit word meaning 'breaking away'; i.e. the bride is breaking away from her parent's home. They emphasise that marriage is not merely a legal contract but is a sacrament, a holy union between two souls: 'They are not said to be husband and wife, who merely sit together. Rather they alone are called husband and wife, who have one soul in two bodies.' ...read more.

The couple walks down the aisle to the ringing of bells and photos are taken. A key feature of the ceremony is that the bride wears white, which symbolises purity and maidenhood. The first hymn also focuses everyone's mind on God. The couple is asked if they're ready because if they weren't then the marriage wouldn't go ahead. The marriage register is signed because they emphasise the marriage did happen legally. The vows are considered to be the moment when the couple becomes married. The vows unite the couple making sure they stay together and remain faithful. They unite the couple with each other and God. The vows suggest that marriage is a gift from God and that the couple should help and support one another. The rings symbolise the promise the couple have given to one another and the belief that marriage cannot be ended except by death just as a ring has no end and symbolise eternity. The wedding cake cut by the couple emphasises the start of their new life together. The father of the bride walks down the aisle with her, which symbolises him giving her away. ...read more.