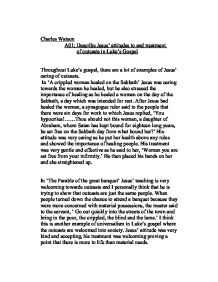 Describe Jesus' attitudes to and treatment of outcasts in Luke's Gospel.

Charles Watson A01: Describe Jesus' attitudes to and treatment of outcasts in Luke's Gospel Throughout Luke's gospel, there are a lot of examples of Jesus' caring of outcasts. In 'A crippled woman healed on the Sabbath' Jesus was caring towards the woman he healed, but he also stressed the importance of healing as he healed a woman on the day of the Sabbath, a day which was intended for rest. After Jesus had healed the woman, a synagogue ruler said to the people that there were six days for work to which Jesus replied, 'You hypocrites!......Thou should not this woman, a daughter of Abraham, whom Satan has kept bound for eighteen long years, be set free on the Sabbath day from what bound her?' His attitude was very caring as he put her health above any rules and showed the importance of healing people. His treatment was very gentle and effective as he said to her, 'Woman you are set free from your infirmity.' He then placed his hands on her and she straightened up. In 'The Parable of the great banquet' Jesus' teaching is very welcoming towards outcasts and I personally think that he is trying to show that outcasts are just the same people. When people turned down the chance to attend a banquet because they were more concerned with material possessions, the master said to the servant, ' Go out quickly into the streets of the town and bring in the poor, the crippled, the blind and the lame.' ...read more.

In this question I will explain about the outcasts in our society and attempt to explain why they are classed as outcasts. An example of a group of people who are outcasts are the homeless, homeless people are usually excluded from society because they appear to look 'scruffy' and dirty. Homeless people make the streets look unclean and there are a lot of stereotypical views regarding homeless people. It is assumed that homeless people are scary because of their looks, and also due to their appearance and cash status, many people would brand the homeless as thieves. Many people also feel 'above' homeless people, or even better than them based on wealth and social surroundings, this can lead to people feeling that they do not have to donate money to the homeless. Another group of outcasts are asylum seekers, many people do not want asylum seekers in the country. There were alot of protests against a home being made just for asylum seekers and there has been a lot of violence abuse aimed at groups of asylum seekers. Many asylum seekers are seen to be 'free-riding' and scavenging from our country. There is a lot of public hatred regarding asylum seekers. The media shows asylum seekers entering the country and claim they have left their own country for weak reasons and have illegally come to England all receiving good treatment. This leads to asylum seekers often becoming scapegoats. ...read more.

Do you agree? Refer to Christianity in your answer. Personally I do not accept that the weak go to the wall, however I accept that today's society is becoming very capitalist. Examples of this are relevant to the world today. Countries such as America and the United Kingdom already have a lot of money, however they force poorer countries into even more debt, by charging so much interest that the countries have no chance of paying it back. The aid that is given is out of pity, and there is such a huge amount of competition, L.E.D.C's cannot even come close in the market. In love, there has been a huge change in the times, there have been a lot more marriages arranged for money, or potential gain for one partner. This has started to defeat any ideas of love between two people. Sport is becoming increasingly worrying, athletes have felt the need to take performance-enhancing drugs and cheat, just because they feel winning is so important. However, there is still hope. To prove that not everything is done for personal gain - Christians have taken the message of Jesus on board and set up charities such as FairTrade. This aims to give farmers in L.E.D.C's a greater 'hope' in life as all the money goes the people who produced the cocoa, instead of the big companies. Also charities, which aim to help the poor, people who put in tireless hours to help people less fortunate than them. This is done with the charity workers getting nothing but satisfaction. So I don't think that everything revolves around personal gain. ...read more.