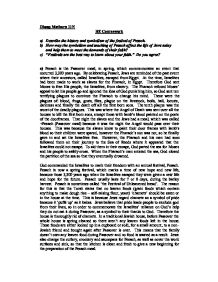 Describe the history and symbolism of the festival of Pesach - How may the symbolism and teaching of Pesach affect the life of Jews today and help them to meet the demands of their faith?

Dheep Matharu 11N RE Coursework a) Describe the history and symbolism of the festival of Pesach. b) How may the symbolism and teaching of Pesach affect the life of Jews today and help them to meet the demands of their faith? c) "Festivals are the best way to learn about your faith." Do you agree? a) Pesach is the Passover meal, in spring, which commemorates an event that occurred 3,300 years ago. By celebrating Pesach, Jews are reminded of the past event where their ancestors, called Israelites, escaped from Egypt. At the time, Israelites had been made to work as slaves for the Pharaoh, in Egypt. Therefore God sent Moses to free His people, the Israelites, from slavery. The Pharaoh refused Moses' appeal to let his people go and ignored the idea of God punishing him, so God sent ten terrifying plagues to convince the Pharaoh to change his mind. These were the plagues of: blood, frogs, gnats, flies, plague on the livestock, boils, hail, locusts, darkness and finally the death off all the first born sons. The tenth plaque was the worst of the deadly plagues. This was where the Angel of Death was sent over all the houses to kill the first born sons, except those with lamb's blood painted on the posts of the doorframes. That night the slaves and the Jews had a meal, which was called +Pesach (Passover meal) because it was the night the Angel would pass over their houses. This was because the slaves knew to paint their door frames with lamb's blood so their children were spared, however the Pharaoh's son was not, so he finally gave in and set the Israelites free. However, the Pharaoh and his men had soon followed them on their journey to the Sea of Reeds where it appeared that the Israelites could not escape. To aid them in their escape, God parted the sea for Moses and his people to safely cross. ...read more.

Jews can trust their faith that God will not abandon them in times of need. Another example would be the Holocaust. Even then, God delivered, due to the Jews' faith. He eventually put a stop to the torture so the Jews could be freed once more and the children can learn about how God saved them. Although many Jews suffered, their suffering enabled future generations of Jewish people to have a better life. In the end God gave the Jews their Promised Land because in 1948, the United Nations recreated Israel. This proved that God would deliver to those who follow the covenant. Pesach was the same case: whereas many people suffered during slavery or by wandering through the desert after the escape, it enabled Jews in further generations to live a better life, where they are free. As they have followed the covenant being 'free' meant that they were also in their Promised Land, Israel. Pesach can also help to ease the pains of Jews from the Holocaust by remembering a joyous event to celebrate so they can appreciate the sacrifices and efforts that were done to give Jews today a better life. These events strengthen Jews' hopes and faith in God so that they do not give up, because God will be there for them and all they have to do is believe and follow the covenant. Pesach also gives Jews a chance to think about other people, as well as themselves and God. They can think about the many people in the world who aren't free to live how they want to. They can hope that one-day everyone will be free. So this event enables Jews to think of others and not be selfish as well as try and treat everyone equally. Pesach is celebrating an event that happened 3,300 years ago so it is a tradition brought down through the centuries. ...read more.

Therefore they are learning a lot about their faith during these Rites of Passage, which proves that this is an excellent way to learn about your faith and arguably better than a festival. Although there are some doubts, you could argue that where having a festival is appropriate, it can be one of the best ways to learn about your faith and almost definitely the most fun and interesting, especially for younger children. Enough time is spent for children to visit schools, for academic education, so going to another school to learn about your faith means excess stress and pressure mounting up on the child, which is not necessary or healthy. Also, one can argue that a child spends most of his/her young life being told what to do by their parents that having them dictate your religion to you could be quite distressing. There is a further worry that having festivals could attract media hype, in Israel perhaps, or there would be a large amount of people who could possibly misplace the true meaning of the occasion but in the end it is down to the person celebrating the occasion. It is on their conscience whether or not they choose to take the festival seriously and use the festival to constructively learn about their faith or whether they are going to become more involved in the material side or the glory side of it. Festivals, I believe, are an excellent way to learn about your faith and can really bring the event to life so if someone decides to take it for granted they have their own mind and make their own choices. God gave everyone the right to decide what's wrong and right. So, therefore, if their morals are misplaced then it is unfair to punish the rest of the community by not letting them learn about their faith in an interesting way, such as by having a festival. ...read more.