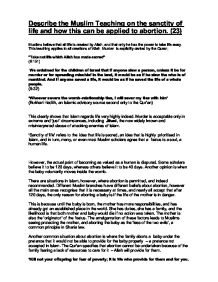 Describe the Muslim Teaching on the sanctity of life and how this can be applied to abortion.

Describe the Muslim Teaching on the sanctity of life and how this can be applied to abortion. (23) Muslims believe that all life is created by Allah, and that only he has the power to take life away. This teaching applies to all creations of Allah. Murder is explicitly denied by the Quran; "Take not life which Allah has made sacred" (6:151) We ordained for the children of Israel that if anyone slew a person, unless it be for murder or for spreading mischief in the land, it would be as if he slew the whole of mankind. And if anyone saved a life, it would be as if he saved the life of a whole people. (5:32) 'Whoever severs the womb-relationship ties, I will sever my ties with him' (Bukhari Hadith, an Islamic advisory source second only to the Qur'an) This clearly shows that Islam regards life very highly indeed. Murder is acceptable only in extreme and 'just' circumstances, including Jihad, the now widely known and misinterpreted clause of attacking enemies of Islam. ...read more.

The Qur'an specifies that abortion cannot be undertaken because of the family fearing a lack of resources to care for it - Allah will provide for them. 'Kill not your offspring for fear of poverty; it is We who provide for them and for you. Surely, killing them is a great sin.' (17:32) This ruling also extends to other financial or social problems, such as the baby being unplanned, or that it would interfere with the family's/mother's plans for later life, such as career. Abortion for the baby's sake is a hotly disputed discussion in many religions, and is probably even more so in Islam. Different scholars give different opinions, and because different scholars have different opinions of the actual abortion age, the process of choosing abortion for the sake of the baby is one which should be carefully considered. However, there is an almost unanimous decision that abortion after 120 days, for the baby's sake, is not permissible, unless the illness/defect in the baby would put the mother at risk. ...read more.

Another situation in which abortion is considered by people is rape. This is another controversial topic, where some people who would not normally allow abortion would make an exception. Some scholars claim that all life should be valued, whether the embryo is 'the result of fornication with relatives or non-relatives or valid marriage. In Sharia life has the same value in all cases.' However, a fatwa was issued to Bosnian women permitting abortion, when the Serbian army openly raped them. A similar fatwa was passed in a similar terrible situation in Algeria. Egypt, a prominent Islamic and Middle Eastern country (traditionally against abortion) issued a law that raped women were allowed abortions. This was a very controversial decision, causing controversy and many differences of opinion. One area where there is no controversy is where an unwanted pregnancy is caused because of unforced adultery - Islam does not permit adultery, and pregnancy is seen as a consequence of this. ...read more.