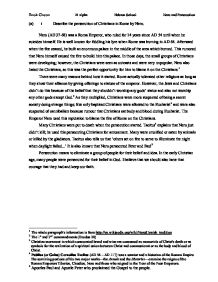 Describe the persecution of Christians in Rome by Nero

(a) i Describe the persecution of Christians in Rome by Nero. Nero (AD 37-68) was a Roma Emperor, who ruled for 14 years since AD 54 until when he suicides himself. He is well known for fiddling his lyre when Rome was burning in AD 64. Afterward when the fire ceased, he built an enormous palace in the middle of the area which burned. This rumored that Nero himself caused the fire to build him this palace. In those days, the small groups of Christians were developing; however, the Christians were seen as outcasts and were very unpopular. ...read more.

of being a secret society doing strange things; like only baptised Christians were allowed to the Eucharist3 and were also suspected of cannibalism because rumour that Christians eat body and blood during Eucharist. The Emperor Nero used this reputation to blame the fire of Rome on the Christians. Many Christians were put to death when the persecution started. Tacitus4 explains that Nero just didn't kill; he used this persecuting Christians for amusement. Many were crucified or eaten by animals or killed by the gladiators. Tacitus also tells us that 'others set on fire to serve to illuminate the night when daylight failed...' ...read more.

3 Christian sacrament in which consecrated bread and wine are consumed as memorials of Christ's death or as symbols for the realization of a spiritual union between Christ and communicant or as the body and blood of Christ. 4 Publius (or Gaius) Cornelius Tacitus (AD 56 - AD 117) was a senator and a historian of the Roman Empire. The surviving portions of his two major works-the Annals and the Histories-examine the reigns of the Roman Emperors Tiberius, Claudius, Nero and those who reigned in the Year of the Four Emperors. 5 Apostles Paul and Apostle Peter who proclaimed the Gospel to the people. ?? ?? ?? ?? Enok Cheon 10 alpha Hebron School Nero and Persecution ...read more.