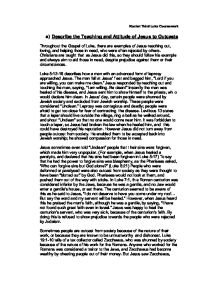 Describe the Teaching and Attidude of Jesus to Outcasts

Rachel Third Luke Coursework a) Describe the Teaching and Attitude of Jesus to Outcasts Throughout the Gospel of Luke, there are examples of Jesus reaching out, loving, and helping those in need, who were often rejected by others. Christians are taught that as Jesus did this, so they should follow his example and always aim to aid those in need, despite prejudice against them or their circumstances. Luke 5:12-16 describes how a man with an advanced form of leprosy approached Jesus. The man fell at Jesus' feet and begged him, "Lord if you are willing, you can make me clean." Jesus responded by reaching out and touching the man, saying, "I am willing. Be clean!" Instantly the man was healed of his disease, and Jesus sent him to show himself to the priests, who would declare him clean. In Jesus' day, certain people were shunned by Jewish society and excluded from Jewish worship. These people were considered "Unclean." Leprosy was contagious and deadly; people were afraid to get too close for fear of contracting the disease. Leviticus 13 states that a leper should live outside the village, ring a bell as he walked around, and shout "Unclean" so that no one would come near him. It was forbidden to touch a leper, so Jesus had broken the law when he healed him, and this could have destroyed his reputation. ...read more.

Jesus enabled Zacchaeus to be accepted back into Jewish worship by saying, "This man, too, is a son of Abraham." He showed love towards Zacchaeus although others mistrusted and shunned him. When people questioned Jesus' attitude, as the crowd did, he told them, "The Son of Man came to seek and save what was lost," Luke 19:10. He saw it as his mission to save sinners, as he says in Luke 5:31, "It is not the healthy who need a doctor, only those who are sick. I have not come to call the righteous to repent; but the sinners." He was prepared to give his own time to the less fortunate and those excluded from the rest of society. In Luke 15:1 we see more of this in the Parable of the Lost Coin. He told this Parable, and the other Parables of the Lost, in response to criticism from the religious leaders of the time. They did not agree that Jesus should associate himself with "sinners." Jesus says, "Suppose a woman has ten silver coins, and loses one. Does she not light a lamp, sweep the house and search carefully until she has finds it? And when she finds it, she calls her friends and neighbours together and says, "Rejoice with me; I have found my lost coin." In the same way, I tell you, there is rejoicing in the presence of the angels of God over one sinner who repents." ...read more.

The servant came back after doing his masters will, but there was still room. The master told his servant, "Go out to the roads and country lanes and make them come in, so that my house will be full." Jesus told this parable to describe the Kingdom of God, which is indiscriminate; it is open to everyone. In God's Kingdom, the poor, the crippled, the blind and the lame will feast; therefore Christians should not reject these people, nor stereotype or show prejudice. Jesus emphasised this in the Parable of the Good Samaritan, Luke 10:25-30, where a Samaritan shows kindness to a Jew who was in need of help, but no one else stopped to help him. Samaritans were considered as inferior as Gentiles, and the Jews hated Samaritans, as the two communities were constantly at war. However, by using the Samaritan as the subject of his parable, Jesus shows that people should not be stereotypical or judge others. Jesus treated all people equally, and Christians are called to follow his example. Jesus' directions to "Go and do likewise" require seeing need and responding whether or not you know or like the person in need. His attitude is summed up in the Sermon on the Plane, Luke 6:37-38, "Do not judge, and you will not be judged. Do not condemn, and you will not be condemned. Forgive, and you will be forgiven. Give, and it will be given to you." ...read more.