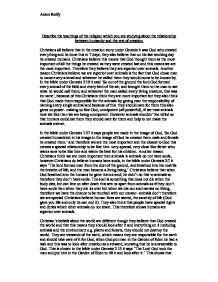 Describe the teachings of the religion which you are studying about the relationship between humanity and the rest of creation.

Describe the teachings of the religion which you are studying about the relationship between humanity and the rest of creation. Christians all believe that in the creation story under Genesis it was God who created everything and he done this in 7 days, they also believe that on his last working day he created humans. Christians believe this means that God thought them as the most important of all the things he created as they were created last and this means we are the most important. Therefore they believe they are superior over animals. Another reason Christians believe we are superior over animals is the fact that God chose man to name every animal and whatever he called them they would come to be known by. In the bible under Genesis 2:19 it said 'So out of the ground the lord God formed every animal of the field and every bird of the air, and brought them to the man to see what he would call them; and whatever the man called every living creature, that was its name', because of this Christians think they are more important but they also think that God made them responsible ...read more.

Christians believe that when God breathed into the humans he gave them a soul; he didn't do this to animals so therefore they don't have souls. The soul is something that does not die when the body dies, but can live on after death this sets us apart from animals as if they don't have souls then when they die its over but when we die our soul carries on living, therefore we have the chance to be reunited with our creator- animals don't therefore we are special. Christians believe human lives are sacred, the sanctity of life (God gave you life and only he can end it). They also think that people have special rights and duties which other animals do not share. This therefore shows humans are superior over animals. Christian's beliefs about the world are different though they believe that God created the world and that this means they should look after it and everything on it including animals and the environment e.g. plants and forests, they should not destroy the world. They are stewards of the earth, which means they are responsible for the earth and should take care of it for God, when ...read more.

Also in the bible it says 'To the Lord belongs the earth and everything in it, the world and all its inhabitants. For it was he who founded it on the seas and planted it firm on the waters beneath.' This quote is under Psalm 24.1,2, and means that even though we live on the earth God is the owner of it as he is omnipotent, we are just there as stewards to look after the earth for him. These quotes show that it was God who made the earth and that the world is his. But Christians have not always been concerned about environmental issues, some people say there to blame for making people think they have the right to do what they want with the earth. Some Christians believe that the earth is like our mother and we should respect it because God made it and us and to show respect to him for giving us life we should care for the earth and treat it as if it was our mother as it is as important as a mother. ?? ?? ?? ?? Adam Reilly ...read more.