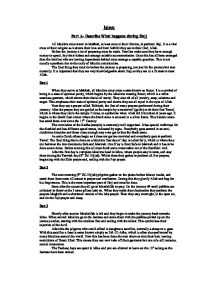 Describe What happens during Hajj All Muslims must travel to Mekkah, at least once in their lifetime, to perform Hajj

Islam Part A- Describe What happens during Hajj All Muslims must travel to Mekkah, at least once in their lifetime, to perform Hajj. It is a vital must of their religion as it shows their love and how faithful they are to their God, Allah. Before the journey a lot of preparing must be made. Families make sure they have enough money to spend, buy their tickets and arrange suitable accommodation. Once this has all been arranged then the families who are leaving dependants behind must arrange a capable guardian. This is not usually a problem due to the unity of Muslim communities. The final thing they must do before the journey is preparing, not just for the journey but also mentally. It is important that they are very knowledgeable about Hajj so they are in a fit state to meet Allah. Day 1 When they arrive at Mekkah, all Muslims must enter a state known as Ihram. It is a symbol of being in a state of spiritual purity, which begins by the Muslims wearing Ihram, which is a white seamless garment, which shows their denial of vanity. They also rid of all jewelry, soap, relations and anger. This emphases their state of spiritual purity and shows they are all equal in the eyes of Allah. ...read more.

Now all pilgrims head back to Mekkah and perform the farewell Tawaf. This is the same journey again done seven times as was earlier on during Hajj. The farewell Tawaf should be the final thing done during Hajj. Afterwards many people visit the Prophet's Mosque in Madinah, but this is only preferable and is not a part of Hajj. Also another drink is taken from the ZamZam well, aswell as dipping their white clothes in it. So the Hajj journey stays with a pilgrim for his or her whole life their names are changed. Men are now Hajji and women are now Hajja. Part B- Explain the importance of Hajj for Muslims and the ways in which it may affect their lives. Hajj is extremely important to Muslims. They try to live a good life so they can go to paradise, because they believe their good and bad deeds will be weighed up by Allah on judgement day. For a Muslim performing Hajj it is like a new beginning and they feel cleansed. This would be a great weight added to the good scales on judgement day. Also as Hajj is one of The Five Pillars, they feel as if they must do it to be let into paradise. ...read more.

It is argued that a pilgrimage should baffect the heart, soul and mind. This would happen to Muslims for example when they stand at Mount Arafat. Although that is a very physical journey it puts their mind into perspective and feel at peace and pure love towards their God. Muslims also come out of Hajj with deeper religious beliefs and stronger feelings. This is another sign of a spiritual journey. Others believe that a true pilgrimage is a physical journey. All pilgrims have a journey to get to their intended place, and even travel more whilst there. To reach the goals of a pilgrimage these people have to see sight where their God once was and witness hard challenges to make them realise to whom they are praying. They also believe that they need to physically show their submission to God to prove their full faith. Most pilgrimages have one thing in common, prayer. Almost every pilgrim prays during their journey, normally for forgiveness. This shows the spiritual side of the pilgrimages. Overall I believe that for a true pilgrimages to happen, it must be a mixture of both a spiritual and physical journey. This is agreed by most religions as their pilgrimages contain both. I disagree with meditation being a form of pilgrimage. It is a form of inner peace but it would not have the same effect as seeing the historical facts, and performing the challenging tasks. SOUrCE: http://www.world-faiths.com/Year%208%20Projects/the_route_of_the_hajj.htm ...read more.