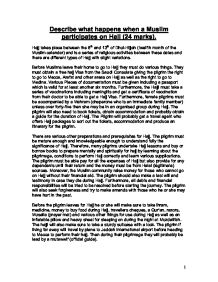 Describe what happens when a Muslim participates on Hajj.

Describe what happens when a Muslim participates on Hajj (24 marks). Hajj takes place between the 8th and 13th of Dhul-Hijjah (twelfth month of the Muslim calendar) and is a series of religious activities between these dates and there are different types of Hajj with slight variations. Before Muslims leave their home to go to Hajj they must do various things. They must obtain a free hajj Visa from the Saudi Consulate giving the pilgrim the right to go to Mecca, Arafat and other areas on Hajj as well as the right to go to Medina. Various Pieces of documentation must be given including a passport which is valid for at least another six months. Furthermore, the Hajji must take a series of vaccinations including meningitis and get a certificate of vaccination from their doctor to be able to get a Hajj Visa. Furthermore, female pilgrims must be accompanied by a Mahram (chaperone who is an immediate family member) unless over forty-five then she may be in an organised group during Hajj. The pilgrim will also need to book tickets, obtain accommodation and probably obtain a guide for the duration of Hajj. The Pilgrim will probably get a travel agent who offers Hajj packages to sort out the tickets, accommodation and produce an itinerary for the pilgrim. There are various other preparations and prerequisites for Hajj. The pilgrim must be mature enough and knowledgeable enough to understand fully the significance of Hajj. ...read more.

The pilgrim will however, run when green markers along the path indicate to run. Each time the pilgrim reaches the summit of either hill, he or she will face the Ka'aba say a supplication and raise their hand. After finishing Sa'y, the pilgrim will have completed the Umrah (lesser pilgrimage). The pilgrim will then break his or her Ihram by cutting hair by starting from the right side of the head. In addition, female pilgrims will cut a fingers tip length of her. Males will not shave their head yet to make sure enough is left to be able to shave after Hajj. Moreover, various other things such as having a shower and changing to normal clothes are allowed for the pilgrim. The pilgrim will then spend their time in Mecca; fasting, praying and reciting the Qur'an waiting till the 8th of Dhul-Hijjah. On the 8th of Dhul-Hijjah (day of Tarwiya) the pilgrim officially begins Hajj. The pilgrim will perform the Fajr prayer and then the Niyyah (intention) for Hajj and put on the Ihram. Soon after the Fajr prayer but before Zuhr prayer, the pilgrim will travel seven kilometres east to Mina to set up camp. At Mina they will stay the night in one of several large tents located in sections according to the area of the world the pilgrim comes from with various toilets and washing facilities nearby. The pilgrim is not allowed to cook but can buy from street vendors or eat from their own supplies. ...read more.