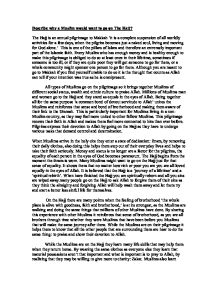 Describe why a Muslim would want to go on The Hajj?

Describe why a Muslim would want to go on The Hajj? The Hajj is an annual pilgrimage to Makkah 'it is a complete suspension of all worldly activities for a few days, when the pilgrim becomes just a naked soul, living and moving for God alone.' This is one of the pillars of Islam and therefore an extremely important part of the Islamic faith. Every Muslim who has enough money and is healthy enough to make this pilgrimage is obliged to do so at least once in their lifetime, sometimes if someone is too ill, or if they are quite poor they will get someone to go for them, or a whole community might sponsor one person to go for them. Although you are meant to go to Makkah if you find yourself unable to do so it is the thought that counts as Allah can tell if your intention was true as he is omnipresent. All types of Muslims go on the pilgrimage so it brings together Muslims of different social status, wealth and ethnic culture to praise Allah. Millions of Muslims man and women go to the Hajj and they stand as equals in the eyes of Allah. ...read more.

By sharing this experience with other Muslims it reinforces that sense of brotherhood, as you are all brothers through time whether they were Muslims that have been before you Muslims that will make the same journey after them. While the Muslims are on their pilgrimage it helps them to know that all the other people that are surrounding them are hear to do the same thing: to praise and show their devotion to Allah. While the Muslims are on the Hajj they learn many life skills that may help them when they return home. By wearing the same clothes as everyone else they learn that material possessions aren't that important and what is important is to pray to Allah, by realizing that they may be willing to give more to charity: Zakat. Muslims also learn patience and determination as they are needed when they do 'the stand'. the most important part of the Hajj is ' the stand' Wuquf as they bear their soul to Allah and they get an immense feeling of being at one with Allah ' they stand before their creator, it is as it were the apocalypse'. ...read more.

One of the main points of going is to make you a better Muslim and to wipe away all the characteristics that make you, you. It is meant to be the climax of their lives- to connect with Allah, what everything ahs been leading up too when pilgrims get home they are given a new title in the Muslim community 'Hajji' for a man and 'Hajjah' for a women. When a Muslim gets home they are a new person who has been 'spiritually cleansed' and they are enabled to begin afresh. When a Muslim returns from the pilgrimage they should be a more devout Muslim as they have experienced what it is like to be at one with their God. In conclusion I think that Muslims go on the Hajj to show their devotion to Allah and to show that they would give up everything for him. Muslims would want to go on the Hajj because they get to experience the awesome presence of Allah and they are blessed by experiencing that one to one connection with Allah. If you lived in a none Muslim country I think one of the reasons they would want to go on the Hajj would be so they could experience that strong bond of brotherhood. ...read more.