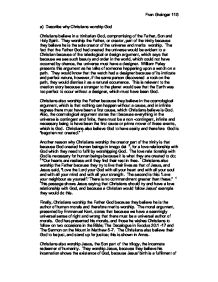 a) Describe why Christians worship God Christians believe in a trinitarian God, compromising of the Father, Son and Holy Spirit. They worship the Father, or creator, part of the trinity because they believe he is the sole creator of the universe and merits worship. The fact that the Father God had created the universe would be evident to a Christian because of the teleological or design argument, which says that because we see such beauty and order in the world, which could not have occurred by chance, the universe must have a designer. William Paley presents this argument as he talks of someone happening upon a watch on a path. They would know that the watch had a designer because of its intricate and perfect nature, however, if the same person discovered a rock on the path, they would dismiss it as a natural occurrence. This is relevant to the creation story because a stranger to the planet would see that the Earth was too perfect to occur without a designer, which must have been God. Christians also worship the Father because they believe in the cosmological argument, which is that nothing can happen without a cause, and in infinite regress there must have been a first cause, which Christians believe is God. Also, the cosmological argument states that because everything in the universe is contingent and finite, there must be a non-contingent, infinite and necessary being to have been the first cause or prime mover of these events, which is God. Christians also believe God to have aseity and therefore God is "begotten not created." 1 Another reason why Christians worship the creator part of the trinity is that because God created human beings in imago dei 2, for a love relationship with God which they need to fulfil by worshipping God. ...read more.

Also, to follow the example of Desmond Tutu, a Christian would be forgiving because that was how Jesus lived his life and Christians try to mimic the life of Jesus in their own. Desmond Tutu chaired a Truth and Reconciliation Commission in 2001 after the apartheid had been abolished to try and reunite South Africa. A Christian would also try to show a life of agape mimicking that of Jesus through their actions towards others, they would support the Salvation Army for example to show feelings of equality towards the homeless, a Christian might also support organisations such as L'Arche Communit� which helps the mentally disabled. A Christian would also support Christian founded organisations such as The Hospice Movement founded by Dame Cicely Saunders to show an act of self-giving and an awareness of the sanctity of life and that it should not be prematurely terminated through euthanasia, because death is a process not an event and life is innocent. A Christian would not be racist and would follow the biblical teachings of the Parable of the Good Samaritan and Galatians 3:28. A Christian, especially a member of the Quaker movement founded by Lord Donald Soper, may be a pacifist, protesting against war and conflict because of the huge waste of innocent, sacred life that war provokes. Quakers believe that it insults to God's creation of human beings in imago dei to kill for war; "We totally oppose all wars, all preparation for war, all use of weapons and coercion by force, and all military alliances: no end could ever justify such means. We equally and actively oppose all that leads to violence among people and nations, and violence to other species and to our planet. ...read more.

Augustine's Confessions (Book 1, Chapter 1 (Translated by J.G. Pilkington, Basic Writings of Saint Augustine, Grand Rapids, Michigan, 1980.) 4. "Love the Lord your God with all your heart and with all your soul and with all your mind and with all your strength. The second is this: 'Love your neighbour as yourself.' There is no commandment greater than these" The Bible, Mark 12:30-31 5. "He became what we are so we might become what he is" Iranaeus 2nd Century 6. "There is no male or female, slave or free, Jew or Greek, for all are one in Jesus Christ." The Bible Galatians 3:28 7. "How can you love God who you cannot see, if you do not love your neighbour who you can see?" The Bible 1 John 3:17-18 8. "We totally oppose all wars, all preparation for war, all use of weapons and coercion by force, and all military alliances: no end could ever justify such means. We equally and actively oppose all that leads to violence among people and nations, and violence to other species and to our planet. Refusal to fight with weapons is not surrender. We are not passive when threatened by the greedy, the cruel, the tyrant, the unjust. We will struggle to remove the causes of impasse and confrontation by every means of non-violent resistance available." Public Statement of the Yearly Meeting Of Quakers 1987 9. "Commit it then to the flames, for it can contain nothing but sophistry and illusion." David Hume, Enquiries Concerning Human Understanding and Concerning the Principle of Morals, Oxford University Press, 1975, page 165 10. "7% being regular Christian worshippers in the UK" Andrew Wright, Dialogue 9, Types of Theism and Atheism, page 39 11. "If God is dead, everything is permitted" Dostoyevsky, The Brothers Karamazov, 1881. For more information on the misattribution of the above quote to Dostoyevsky, visit http://www.infidels.org/library/modern/features/2000/cortesi1.html Fran Grainger 11S ...read more.