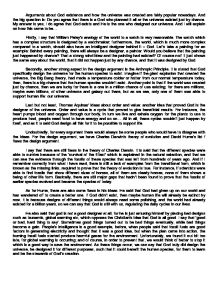 Arguments about God existence and how the universe was created are fairly popular nowadays. And the big question is: Do you agree that there is a God who planned it all or the universe existed just by chance. My answer is yes, I do agree that God exists and He is the one who designed our universe. And I will explain on how this came to be... Firstly, I say that William Paley's analogy of the world to a watch is very reasonable. The watch which has a complex structure is designed by a watchmaker; furthermore, the world, which is much more complex compared to a watch, should also have an intelligent designer behind it - God. Let's take a painting for an example: Behind every painting, there will always be a designer, a painter. Would you believe that the painting just happened by chance? That a strong wind blew and the painting had existed? ...read more.

Order and value is a cycle that proved to give beneficial results. For instance, the heart pumps blood and oxygen through our body, in turn we live and exhale oxygen for the plants to use to produce food, people need food to have energy and so on... All in all, these cycles wouldn't just happen by itself, and as it Is said God design all this for it to be possible to support life. Undoubtedly, for every argument there would always be some people who would have to disagree with the ideas. For the design argument, we have Charles Darwin's theory of evolution and David Hume's list f flaws the design argument. I say that there are still flaws in the theory of Charles Darwin. It is said that the different species were able to survive because of the 'survival of the fittest' which is explained in the natural selection, and that we can see the evidence through the fossils of these species that was left from hundreds of years ago. ...read more.

He also said that god is not a good designer at all, for he is just amusing himself by placing bad designs such as tsunamis, global warming etc, which opposes the Christian's idea that God is all good. I say that 'good or bad, hard thing to say'. Sometimes good things turned out to be bad things eventually, while bad things become a gain. People's intelligence is a good example, before, when people said that fossil fuels are good factors in generating electricity and thought that it was a good idea, but when the plan came into action, the burning fossil fuels started produce harmful gases for the environment. Unfortunately, we found it out bit too late, for global warming is occurring; and of course, in order to prevent that, we would think of better to stop it which is a good way to save the environment. As these things occur, we can say that God truly did design the universe, he designed it for different purposes, such that it could benefit the human species, for them to learn and be the stewards of God's creation. ...read more.