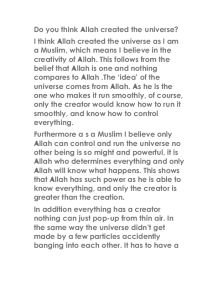 Did Allah create the universe?

Do you think Allah created the universe? I think Allah created the universe as I am a Muslim, which means I believe in the creativity of Allah. This follows from the belief that Allah is one and nothing compares to Allah .The 'idea' of the universe comes from Allah. As he is the one who makes it run smoothly, of course, only the creator would know how to run it smoothly, and know how to control everything. Furthermore a s a Muslim I believe only Allah can control and run the universe no other being is so might and powerful, it is Allah who determines everything and only Allah will know what happens. ...read more.

It has to have a cause .the only cause big enough, powerful and creative enough is Allah. Also a human being is part of the creation and the wishes of Allah, therefore they're limited in their thinking and views of life and things, especially as their lives ,thoughts are confined to time and space and in general have a limited mind e.g. he concept of forever is so broad and big that we can't imagine it ,put it into proportion or numbers ,it's just infinity .However time and space isn't the only thing in the universe, Allah whose power and ability is not limited ,isn't confined to the space world. ...read more.

However some people may disagree with me as they believe in the scientific theories: the big bang theory or the steady matter theory. However many Muslims accept these theories, as the Quran mentions scientific findings e.g. the earth being egg shaped, the foetus being like a chewed up piece of meat. So Muslims believe that as the Quran supports these type of scientific finding the big bang theory or any other scientific theory may be correct. But whatever happened Allah was the cause and the creator of it. ...read more.