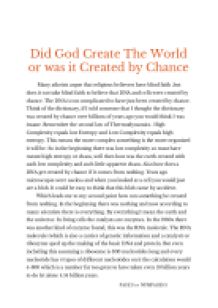 Did God Create The World or was it Created by Chance?

﻿Did God Create The World or was it Created by Chance Many atheists argue that religious believers have blind faith ,but does it not take blind faith to believe that DNA and cells were created by chance. The DNA is too complicated to have just been created by chance. Think of the dictionary, if I told someone that I thought the dictionary was created by chance over billions of years ago you would think I was insane. Remember the second law of Thermodynamics- High Complexity equals low Entropy and Low Complexity equals high entropy. This means the more complex something is the more organised it will be. So in the beginning there was low complexity so must have meant high entropy or chaos, well then how was the earth created with such low complexity and such little apparent chaos. Also how does a DNA get created by chance if it comes from nothing. Years ago microscopes were useless and when you looked at a cell you would just see a blob. It could be easy to think that this blob came by accident. Which leads me to my second point how can something be created from nothing. In the beginning there was nothing and now according to many scientists there is everything. ...read more.

If they were red-dwarfs they would have been too cold to support life-bearing planets. All the rest of the planets are unfit for human life and this shows how unique the earth is which I believe must have taken a creator. Time is the creator of all things Well this is how it works we think to ourselves nothing is impossible, so the impossible become probable. The probable then becomes certain and the certain becomes reality. Spontaneous Generation is the theory that life came from inorganic materials but was proven wrong by Louis Pasteur. He wrote that you would need a parent cell to create another cell, it cannot just be formed just like that. Anyone who does believe in spontaneous generation have been deluded by their own poorly conducted experiments. Atheist prefer to hear that life came from inorganic substances instead of a creator or miracle. This makes sense because atheists believe that the universe just ?popped? into existence. One minute nothing, next minute everything. The earth also had to have been find tuned from the moments of its inception for it to be able to sustain life. And nothing was living in the beginning so there couldn?t have been any parent cell. ...read more.

You would be missing important parts of the house like a door and a bathroom. This is the same for proteins ,they are far too complex to have been created just using amino acids. Some people also believe that there was a special protein which assembled itself by chance in a prebiotic environment. Prebiotic is the general term to refer to chemicals that induce the growth or activity of micro-organisms. Double Thinkers are also another sort of theory. It is the belief that God helped start evolution and the world. To Double Think actually means the acceptance of contrary opinions or beliefs at the same time, especially as a result of political indoctrination. In conclusion everything can?t start from one point of inception full of nothing. The Multiverse Theory is too extreme and crazy. To say that there are billions of other universes where something impossible in this universe is possible in another ,is too farcical to even consider. If we still believe in the Big Bang Theory then why is it still a theory and where does all the starting matter come from? ?Our minds work in real time, which begins at the Big Bang and will end, if there is a Big Crunch - which seems unlikely, now, from the latest data showing accelerating expansion. Consciousness would come to an end at a singularity.?-Stephen Hawking. PAGE 3 of NUMPAGES 3 ...read more.